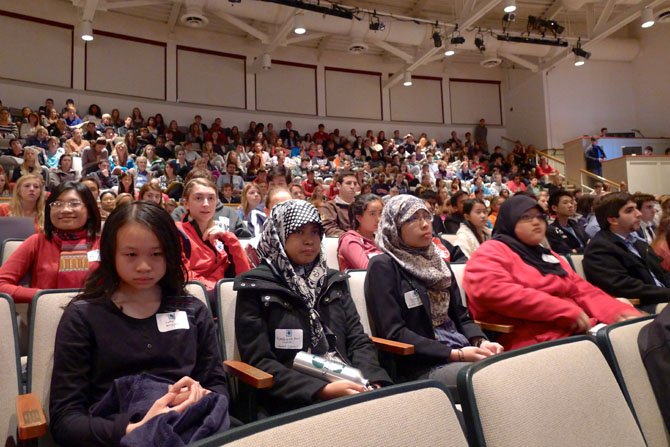 The auditorium of St. Stephen’s & St. Agnes School - Upper Campus is packed with students and teachers on Nov. 13.

Alexandria — “What is the most environmentally destructive thing most of us do in our lives?” environmental activist Chris Jordan asked students at last week’s Students for Sustainability Conference. 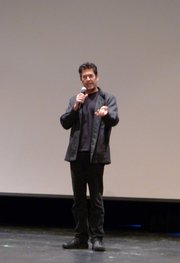 “It’s eating meat. Seventy percent of all the green that is grown in the U.S. goes to feed cattle so that we can eat meat. If you take that green, you can feed 800 million people which is almost all the people in the world who lack food,” he said.

About 150 students from 21 high schools and middle schools in the D.C. area, Baltimore and Richmond, along with 33 students visiting from Asia who were traveling with the East-West Exchange Center in American schools, participated in the fifth annual Students for Sustainability Conference (S4S) hosted by St. Stephen’s & St. Agnes School on Thursday, Nov. 13. The conference was a day of education and discussion where students learned to make a difference for environmental sustainability in their schools, communities and in their own countries.

As the keynote speaker, Jordan used photos to show the impact of people’s behaviors on the environment.

“There is an interesting phenomenon that all we see is the waste we create and our family creates,” said Jordan. “We never get to see the collective waste we all create together. Every day we read these numbers — 210 billion plastic bottles we used in the U.S. last year, 130 million cellphones in the U.S. thrown out every year, 925 million people in the world right now who are starving — these numbers are far far beyond the ability of human minds to comprehend.” 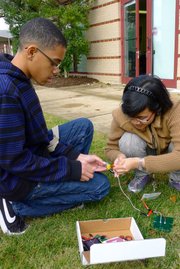 Two students are making a wind turbine to generate electricity.

To enable people to comprehend those abstract numbers, one of Jordan’s projects is taking pictures of a small amount of everything, such as cellphones recycled at one facility. Then he stitches them together by using Photoshop, and creates an image to show what 130 million cellphones look like. He also showed students pictures of 1.14 million brown paper bags used in the U.S. every hour, 2 million plastic bottles consumed every five minutes in the U.S.

“Shocking, right?” Jordan said. “When we really feel something, that’s when we act. That’s why I create these images that illustrate the statistics of the mass consumption. This process allows me to raise an issue I’m really interested in: the relationship between the individual and the collective. If you take one of those bottles, no one will notice the difference. Every single individual does make a difference if we do them collectively.”

Jordan also showed students a film he made at Midway Atoll, where he witnessed plastics and trash inside the stomachs of thousands of dead baby albatrosses. These baby birds are fed by their parents who mistake the floating trash for food as they forage over the polluted Pacific Ocean.

“I felt so sad for those birds,” said Nouchee Bee, a junior high student visiting from Laos. “I was crying when I saw that film. I learned how to protect environment from that speech.” 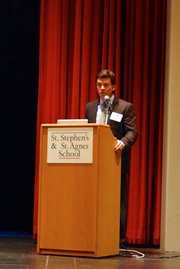 Has Gunewen, a biology teacher from Singapore, felt the same way. “It was very moving. It taught us how to minimize waste. We need to think globally, not just think about our own country. I will bring this idea to my class, and teach my students how to protect the Earth.”

After the conference, students experienced 13 breakout sessions where they were taught to make a wind turbine to generate electricity, learned why safe drinking water matters for children in Africa, how technology can connect with nature, and explored two kinds of electric cars.

“I’m interested in learning about those environmental organizations,” said Matthew Mccormaca, an 8th-grader who just joined the Greenpeace session. “The speech is very inspirational. What strikes me is how much waste we create every year. It’s just astounding. I’ll try to recycle more and stop using wasteful things.”

In the afternoon, students attended the Green Forum, where they worked in teams to weigh in on environmental issues during a fun competition for prizes.

“This is our fifth year of hosting S4S Conference,” said Linda Stratton, director of communications at St. Stephen’s & St. Agnes School. “It’s grown every year. Environmental sustainability is a big part of our school culture and a part of our curriculum. We’re really trying to encourage our students not only to be aware of different environmental issues, but to be educated and to take action. And so this conference is a great way for our students to get involved, take the leadership role, host other schools, host other students to our campus to show them what we’re doing here and expose them to all different facets of environmental sustainability.”

Chevy Volt electric car is exhibited at the school.