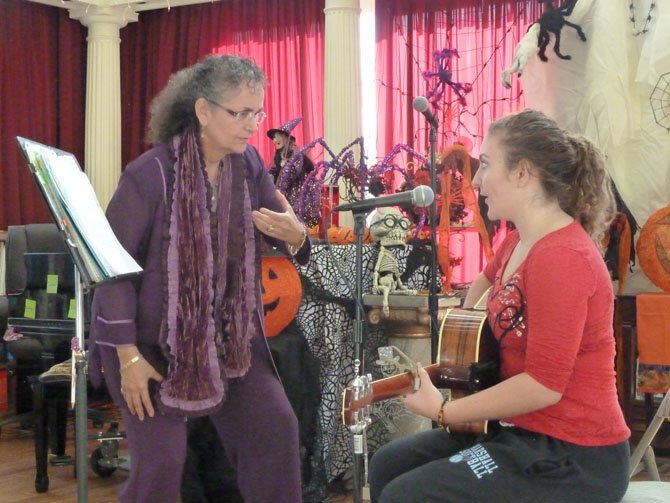 Chrissellene stresses “Inhale or Else” with 16 year-old Sammie Hakim.

Potomac — “My voice took me to Europe, where I sang opera, operetta and musical theater and was contracted with the Vienna State Opera and the Kassel State Opera in Germany. Soon I was singing everywhere from Greece, France and Italy to The Kennedy Center and Lincoln Center.

Ultimately, my voice began to fail me,” said Chrissellene Petropoulos.

Petropoulos is a vocal teacher whose many students come to her for performance training — but they also come for the other lessons she imparts. Her father, George P. Petropoulos was an otolarngologist — an ear, nose and throat surgeon — but he did not know how to help her when she lost her voice. She tried the standard remedies of the era — hot tea and honey, keeping quiet all day to rest her voice, speaking only in a whisper — but nothing helped her regain the strength and quality that she previously had. She left the stage and came home to begin researching how a vocalist can maintain their voice for life. 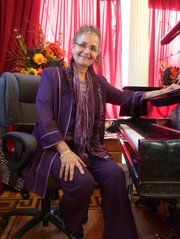 Petropoulos and her husband Demitrios Mantzouranis reside in the home she grew up in on Harrington Drive in Potomac. After returning to Potomac, they purchased it from her parents — and then built an addition called “The Parthenon” to honor her parents and their Greek heritage. This addition provides a teaching and performing area.

After 12 years of research, she has developed an analytical scientific system for maintaining the ability to use the voice. Her program is called the “10 Technical Commands to Vocal Mastery” She said, “This system provides fundamental changes in the way one builds, strengthens and repairs the breathing and vocal apparatus for the singing, acting and speaking voice. Vocal Mastery directly addresses and diagnoses the breathing and vocal mechanisms into discrete physical parts. The system demonstrates and creates an acute awareness of the value of knowing how and why your body functions, while strengthening your individual breathing singing and speaking mechanisms.”

Petropoulos teaches students from ages 9 to 75 with many different performing styles and goals. She tailors her instruction to the individual requirements of the student, actor or singer. “I build into the performer the ability to take criticism — both positive and negative — and also instruct them in how to build self-worth and self-confidence,” she said. “Criticism is not about who you are — it’s about what you are presenting. I tell the vocalist to never personalize. We are not here to fight or to be right — but to entertain. Only the performer has control over how they react.”

Many of her students have become professional performers. Noah Robbins has performed on Broadway in “Brighton Beach Memoirs” and “Arcadia.” Sammy Hakim is an up-and-coming 16-year-old singer/songwriter who recently released her song, “Mark Me.” Alan Paul is associate director of the Shakespeare Theatre Company.

Petropoulos skypes with current and former students from all over the country on a daily basis. “I love teaching people who are serious about what they do,” said Petropoulos. “My strongest passion is building voices for performances.”

Robbins describes how Petropoulos helped him: “I started taking lessons with Chrissellene when I was 17. I had just been cast as Pseudolus in ‘A Funny Thing Happened on the Way to the Forum’ and I concluded that being the lead in a musical was a pretty good reason to learn how to use my voice. At that time, I believe the medical term for the way my voice sounded was ‘dying cat.’ I was perpetually hoarse and if I spoke on stage for longer than 10 minutes, my voice would disappear. After a couple of months with Chrissellene, I was able not only to survive the shows vocally, but to keep my voice strong through the whole show. At one time, I was able to get through two shows in one day, with no vocal repercussions. I would not have been able to play Max Bialystock in ‘The Producers’ the following year — a much more vocally demanding role. And lastly, I wouldn’t have been able to project on a Broadway stage if it weren’t for the Commands.”

Petropoulos also works with students who are not performers, but who need support and advice in managing their lives.

Barbara Hill calls Petropoulos weekly from Kansas for life-coaching. Hill met Petropoulos through her daughter and husband who were studying voice with her. “I am not a singer,” she said. “My goal is to be able to accept situations in my life — to accept common criticism and learn that I cannot control what is said, but I can control how I will react. She has also helped me to build my self-confidence and self-worth.”

Petropoulpos is the voice of Potomac Days each year as she opens the ceremonies by singing the National Anthem. Because she has learned the secrets of the “10 Technical Commands to Vocal Mastery” her voice is stronger than it was 20 years ago. She said, “I have rebuilt my own voice based on the anatomic and physiologic principles I learned through work with doctors. My personal struggle and quest to find answers has made it possible for me to build a bridge between singers and science.”