The sound emanating from King Street in the area of Old Town Alexandria will cause people to stop in their tracks and turn their heads. What they will see is a young woman standing on the street corner, not far from the harbor, singing with a soprano voice that radiates throughout the area. It is there that Krista McClelland, 26, displays her talent. Her performance captivates the audience of passers-by who gather around her. With a wooden box that sits on the ground in front of her, it is not uncommon for her impromptu audience to throw in some dollar bills to show their support and appreciation of her singing.

Born in Georgia, McClelland has moved 21 times, and her longest stay anywhere has been in Virginia. She currently resides in Alexandria. 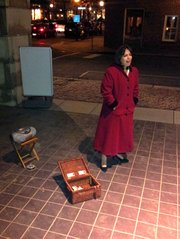 Her involvement with music goes back to her early childhood days. Her grandmother played the piano, guitar, and also taught voice; she was passionate about teaching children. When McClelland was approximately two or three years old, her grandmother gave her private lessons on the keyboard. Her grandmother had a method of teaching notes and rhythms, and she put flashcards on the floor in the shape of a piano. She color coded the keys and had a 15-page booklet which was known as Delia’s method for teaching and singing music.

McClelland sang her first solo at age 5, and she began singing in the church chorus when she was 7 years old. The pastor was impressed, and her parents were supportive. “It sparked a very positive reaction,” McClelland said. She played the trumpet at age 8. “I wanted to be like [Louis] Armstrong,” she said. At the same time, she was in the choir and the band until middle school when she moved three times in one year. She moved to Brazil for five months and then returned. While she was there, she met a rock star. “He forced me out of my shell,” McClelland said. Because she followed him around, her nickname became “Shadow.” Not only did she gain confidence from that trip, but it was also inspirational regarding her desire to sing.

In 2009, McClelland went to Boston and participated in a program that had 50-60 singers. “I was able to train with some huge names,” she said. Simon Estes was one of her close mentors. “Jerry Hadley made a big difference to me,” she said. Hadley was a world-class tenor. He gave McClelland an hour of his time. “That hour completely changed me,” she said.

McClelland pursued a degree in music at Boston University. “My last year in college, we geared toward an hour long recital. My recital was the day before graduation. I got my first role in the opera my last semester, and I used my final recital as a benefit for Save the Children,” McClelland said.

Following a medical leave of absence from attending graduate school at Brigham Young University, McClelland returned to Virginia. She had the opportunity to hear and meet the diva of a generation of opera singers — Evelyn Lear. Lear, a soprano, became McClelland’s mentor and teacher for the following one and a half years and taught her free of charge. “She saw something worth training. We adopted each other as grandmother/granddaughter,” McClelland said. Recognizing McClelland’s talent, Lear encouraged her to get involved in The Wagner Society which is a group of opera singers who specialize in singing Wagner’s music. “I was so very much vocally a baby,” McClelland said.

In April 2011, McClelland went to Brazil to compete in the Maria Callas competition. She achieved second place and a prize for the best interpretation of Mozart. “I got into that competition because I have a Brazilian passport. I was the only American in that competition,” McClelland said. She also did a lot of concert in one city, Maringa, where her cousin is the mayor.

McClelland began street performing a few years ago for the fun of it. During the summer of 2012, she befriended a character artist in Old Town who drew a sketch of her as an opera singer, and McClelland sang. The entire boardwalk of people stopped. “People really responded well,” McClelland said.

Karen L. Bune is a freelance writer. She serves as an adjunct professor at Marymount University in Arlington and George Mason University in Fairfax.

She continued to sing near the water by the boardwalk and also further up on King Street in the heart of the shopping district one to two times per week. “I started leaving with no less than $50 to $60 a night. One Saturday, I was there for four hours and left with $495,” she said. Having suffered huge financial fallout in 2012 and working temporary jobs, McClelland’s street singing has been an added resource for her. “It’s been a major source of keeping me afloat,” she said.

Despite the environmental hazards that King Street presents including noise, traffic, smoking, smog, and dogs, McClelland has found a niche there. “It can be a difficult place to sing, but I love singing there. It’s a special place. I can go and sing anything,” she said. There are times she has left with no voice.