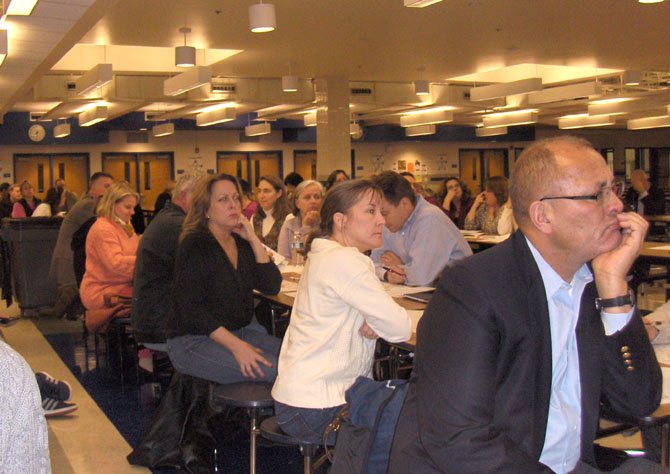 After Monday’s boundary-change meeting, some parents discussed their own concerns with the potential changes.

Karen Vance lives in the Hayden Village community near Willow Springs Elementary, and her son was moved in the last boundary study. “Centreville High is two miles from my house and my son played SYA sports all his life,” she said. “But Centreville’s overcrowded, so he goes to Fairfax High. He plays football and will be a junior there next year.”

Now, though, there’s a chance he could be moved out of Fairfax and sent to another school to help alleviate Fairfax’s overcrowding. Boundary changes could affect his sister, as well.

“I have a daughter in eighth grade at Lanier and all her friends will go to Fairfax High,” said Vance. But because her family lives outside the City of Fairfax, said her mom, “She’d go elsewhere.”

Vance said school officials “have to do a comprehensive study so we don’t have to do this again in three years. I’d rather have my children in trailers than moved again — not to mention the problems with busing that boundary changes would bring.”

Ananda Bastola lives in Fair Oaks’s Ridgetop Terrace community. His son’s an eighth-grader at Lanier and, since they live just outside the Fairfax High boundary, he believes his son will be allowed to attend that school next year.

His daughter, however, is in advanced academic programs (AAP) and was transferred this year from Greenbriar West Elementary to Willow Springs. But he’s worried that the boundary changes might prevent her from continuing on to Rocky Run Middle School.

“I’d like her to go to Rocky Run because it’s a good school and all her Greenbriar West friends will be going there,” said Bastola. “But she might get switched to Lanier if the AAP boundary is changed.”

Basically, he said, “I think they need to redraw all the school boundaries from scratch so we don’t have all this fragmentation.”

Centreville — School boundary changes are never easy and, no matter how they end up, somebody’s always unhappy. But when schools are projected to be at 125 percent and 109 percent of their building capacities in just a few more years, something has to be done in advance to prevent it.

As a result, nearly 300 people filled Fairfax High’s cafeteria Monday night, Nov. 26, to hear what’s being considered and to voice their concerns and opinions. And whatever ultimately happens will affect students not only in Fairfax, but in Centreville and Chantilly, as well.

“Fairfax High School and Lanier Middle School are overcrowded,” said FCPS spokeswoman Barbara Burke. “They’re owned and operated by the City of Fairfax. But 65 percent of the students who attend Fairfax are county residents, so we’re looking to do something that’s workable for everybody.”

Parents received maps showing the schools with attendance areas contiguous to Fairfax High and Lanier. They also received charts listing the high schools and middle schools currently in the boundary study, plus information about their building capacities, current enrollments and 2017-18 projections.

A map of the school boundary study area under consideration.

This study will impact only middle and high-school students who live in Fairfax County. No elementary-school boundary changes are involved. But middle- and high-school feeder schools may change for county students.

Currently, high schools in the boundary study are Centreville, Chantilly, Fairfax, Falls Church, Oakton, Woodson and Robinson Secondary. Middle schools in the mix are Franklin, Frost, Jackson, Lanier, Liberty, Robinson and Rocky Run. But Barbara Burke said Madison, Lake Braddock and South County might also be added in, and parents were asked to tell which schools they thought should be included in the study.

“The decision on the boundaries will be made in May to prepare for the next school year,” she said. And in response to a parent’s question, James said school officials initially want to alleviate the overcrowding by moving about 300 students currently attending Fairfax High to other schools.

But it’s not as simple as that because, at the same time, FCPS is holding community meetings to gather public input about the timing of expanding advanced academic services to all pyramids within the school system. The goal is to ensure that all students have access to advanced academic programs (AAP). 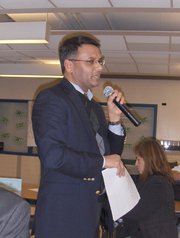 Ajay Rawat, FCPS coordinator of Facilities Planning Services, told parents that, “If the AAP changes are approved, they’ll be included in the boundary study — including Robinson, which has the IB [international baccalaureate] program.”

Typically, he said, when the changes are implemented, rising eighth-graders and rising seniors affected by them would be grandfathered and could attend their current schools, instead of having to move.

“No students who currently reside in the City of Fairfax will be impacted by the study,” said Rawat. “We’ll look at all the schools with contiguous boundaries, but we’re not limited to them, if other schools have the capacity to offer relief.”

But things are crowded at Centreville and Chantilly high schools, too. Centreville’s building capacity is 2,056 and its current enrollment is 2,381 students for 116-percent building utilization. By 2017-18, it’s projected to have 2,498 students using 121 percent of its building.

Chantilly was renovated several years ago to increase its building capacity to 2,583 students. Trouble is, it already has 2,681 this year for 102-percent building utilization. Its 2017-18 projects are for 2,761 students using 107 percent of its building.

So when a parent asked, “How come some Greenbriar East and Greenbriar West elementary students don’t go to Rocky Run, the middle school closest to them, rather than to Lanier?” Rawat had an answer ready. “Rocky Run has the capacity to accommodate them,” he said. “But Chantilly doesn’t.”

Besides receiving all the students from the four, City of Fairfax elementary schools — Daniels Run, Eagle View, Fairfax Villa and Providence — Lanier Middle and Fairfax High also receive all of Willow Springs Elementary’s students. That translates into 157 students currently at Lanier and 364 students at Fairfax just from Willow Springs.

From left: Parents Tina Steblein and Reem Akkad talk about potential effects of the boundary changes.

But that’s not all, because some of Greenbriar East, Greenbriar West, Colin Powell and Waples Mill elementary-school graduates also feed into Lanier and Fairfax. Consequently, the total number of these Fairfax County students currently attending Lanier and Fairfax High — just from these four schools alone — is 250 at Lanier and 512 at Fairfax.

So it’s no wonder then, that to ease overcrowding in City of Fairfax schools, the focus is on eliminating many of the students now coming there from the county.

However, many already-worried parents became outraged when Rawat told them that whatever boundary changes are made won’t necessarily be permanent. Trying to reassure them, he said, “If students are switched [to other schools] now, they won’t be moved again for three years.”

Fair Oaks resident Teresa Cleveland (in foreground) and other parents hear details of the boundary study.

But Fair Oaks resident Teresa Cleveland wasn’t buying it. “My son was already moved from Eagle View to Willow Springs,” she said. “Now he could get moved again; and then in three years, he could get again get switched to another school. They should be thinking of the effect of all these changes on the kids.”

Rawat said future relief could come someday in the form of a new high school, but it was too far in the distance to provide solace to the parents at Monday’s meeting. “We’ve identified a need for a west county high school, and it’ll be presented to the School Board on Dec. 20,” he said. “It would eventually relieve South Lakes, Chantilly and Centreville, which are also projected for overcrowding in 2017-18.”

But when a mom asked how soon that new high school could materialize, Rawat replied, “It could take seven to 10 years. We don’t even have a site for it now.”

However, parents told him they don’t want a “temporary patch” for just three years, but a long-range solution. “You need to look at the five-mile radius around the schools,” said another mom. “That’s how you’ll solve this.”

Meanwhile, a parent asked what the hurry was. “Why rush it?” she asked. “Why not take the next six months to decide?”