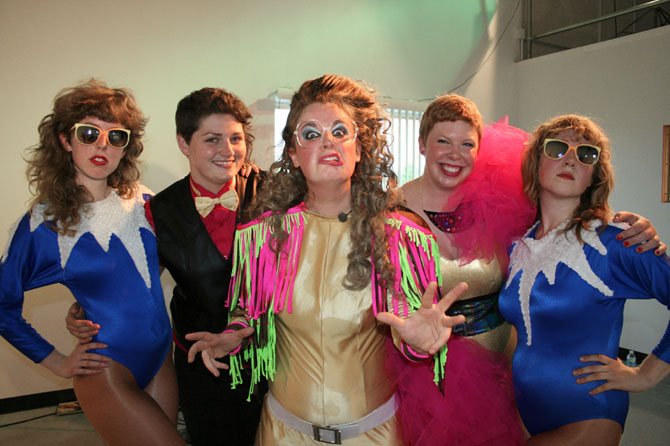 "Married in Spandex," a new documentary from Arlington filmmakers Devin Gallagher and Allison Kole, tells the story of Rachel and Amanda's wedding day, which featured a spandex-clad wedding party and a performance by Leslie Hall, center, and the Ly's. Turanski is to the left of Leslie, and Kole is to her right.

Arlington — Once upon a time, a filmmaker's sister decided to get married. In Ames, Iowa. Wearing gold lame. With a female rapper/performance artist officiating.

From this seedling of a story comes "Married in Spandex," the nearly hour-long documentary from Arlington filmmakers Devin Gallagher and Allison Kole.

Amanda Kole and Rachel Turanski, from left, are the stars of "Married in Spandex," a documentary from Arlington filmmakers Devin Gallagher and Allison Kole.

The movie started out as a wedding gift, a favor from Kole to her sister, Amanda, and Amanda's wife-to-be, Rachel Turanski. But it very quickly turned into something more.

"I was really excited to show the uniqueness of their wedding," Kole said.

THIS WAS NOT A TRADITIONAL WEDDING in any sense. The brides met at a roller derby in Philadelphia, where they live, and decided to get married in Iowa, one of the few states in the country that allow same-sex weddings to occur. Given their taste for the theatrical, Amanda and Rachel decided to see if their favorite performer, Leslie Hall, would be willing to officiate the ceremony, and then stepped it up another notch by deciding to design their own outlandish outfits.

"Married in Spandex" commemorates the lead-up to the wedding, including a visit to a tailor who specializes in spandex and other shiny fabrics, Kole said. To make their guests feel even more a part of their special day, Rachel and Amanda asked them all to wear or incorporate their own spandex in their wedding day finest, whether that meant wearing a spandex headband or, like the wedding party, their own skin-tight, shiny, custom-made outfits. 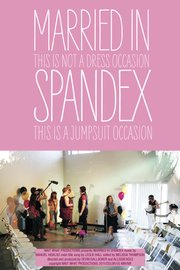 But the heart of the movie is a love story, said Kole, a volunteer crew member and producer at Arlington Independent Media. It just happens that the couple getting married is comprised of two women.

During an election year where the rights of gay couples has been in the headlines more than in recent years, both Kole and Gallagher, a staff producer at Arlington Independent Media, said this film isn't meant to be overtly political. There are undertones, and it's certainly a part of the story that features in the documentary, but the movie is about Rachel and Amanda and their wedding day.

"It's just a story about two people in love." — Devin Gallagher

"A lot of our family was coming in from the east coast and had never been together in one place," Kole said. "As soon as Amanda and Rachel said they were getting married in Ames, people jumped on board and came out."

Kole, who herself wore a gold spandex jumpsuit as one of the bridesmaids, said she wanted to take the opportunity to interview family and friends of the brides. Those interviews, especially with her parents, turned out to be among the most eye-opening sequences in the shooting, she said.

"We'd never really talked about my sister being gay before, as a family," Kole said.

And while her parents are supportive of her sister, it was enlightening for them to discuss what was happening, she said.

"I really think this could be a good film for parents, and for people of different age groups," she said. "This is a personal story about a relationship, but I think parents [in any situation] could relate to this" story of preparing for a child's wedding.

The documentary, which was filmed in June 2010, ended up being more fun than a standard wedding video, she said.

"I think our tagline says it all," Kole said. "This is not a dress occasion; it's a jumpsuit occasion."

The ceremony itself featured the couple's Chihuahua in her own bright, colorful get-up, and a dance troupe from the couple's hometown of Philadelphia performing.

"It was such a spectacle," Kole said. "People walked out after the ceremony speechless. They just didn't know what to say."

SHE'S PROUD OF THE FILM, and her sister's willingness to share her wedding day with a larger audience.

"They were on board with this right away," Kole said. "They realized they were doing something fantastic. It was really fun. I think we all know people like this," who bring a little extra flair to special occasions.

It's ultimately a "very personal story," she said.

Gallagher said the documentary took a little more than a year to edit into its current form, and since its premiere in Philadelphia last summer, has been shown in various film festivals and as part of a fundraiser for lesbian, gay, bisexual and transgender groups, to rave reviews.

"We sold out the premiere in Philadelphia," Gallagher said, adding that some festivals had to book a second showing to meet demand.

It's the kind of film where people have walked out wanting more, he added.

The documentary was supposed to be a simple wedding film for the brides, but "we decided to put more time and money into it" to make it something more, something special, he said.

He admits that it's different to make a film when you're working from a storyboard than when the people you're filming are friends and family.

There's also the difficult task of figuring out which footage to include, and what has to be pared down.

"We had 25 minutes of the dance troupe that performed during the ceremony, but that had to be cut down to like three seconds," he said, disappointedly. "It's difficult because you have to explain what's going on enough, but you can get tripped up because it won't work to explain every detail."

And there are some moments that ended up on the cutting room floor he'd like to include, scenes where things were going wrong — a common occurrence on any wedding day.

"We wished we had a camera going for this: Allison was in her spandex suit, and the car we were in, the tire blew out," Gallagher said. "So here she is, standing on the side of the road waiting for the tire to be fixed," while en route to the ceremony.

He was also disappointed that some of the personal interviews were trimmed down a bit, in the name of keeping the running time down, like Kole's interview with her father.

Melissa Thompson, who worked with Gallagher and Kole as their editor, said she was impressed with the range of opinion and honesty expressed by some of the wedding guests.

Thompson herself said she's not enamored with the idea of marriage for straight or gay couples, but the underlying principle, that some people are not able to enjoy the benefits of other couples simply because they love a person of the same gender, is a greater societal wrong that should be corrected.

"When I started looking at the footage, I saw some of the interviews with Rachel and Amanda's friends who were queer but anti-marriage," she said. "But they were all very supportive, and that's what this comes down to."

HER FAVORITE MOMENT in the film is one of the opening scenes, of the two women in front of the courthouse in Ames, having a tense moment before going in to get their marriage license.

The new documentary from Arlington filmmakers Devin Gallagher and Allison Kole, "Married in Spandex," is included as part of the third annual Reel Independent Film Extravaganza and will be screening at the West End Cinema on Monday, Oct. 15. For more information about the film, go to www.marriedinspan...; to learn more about the film festival, go to www.reelindepende....

In that moment, it doesn't matter who's getting married, or what their genders are.

"It's a couple having a spat," Thompson said. "We had technical problems when we shot it, some of the mics weren't working. But there's this tension between them, standing in front of the courthouse, and it transcends the debate about gay marriage. They're just a regular couple."

Already, "Married in Spandex" has been presented at 15 film festivals and has earned some accolades, including being selected as the Best Iowa Film at the 2011 Hardacre Film Festival, and the Audience Award for Best Documentary at the Philadelphia Qfest in 2011. The film was also an Official Selection of the Cork Film Festival in 2011.

Next up, the film will be included in the third annual Reel Independent Film Extravaganza, in Washington, screening on Oct. 15 at the West End Cinema. After that, Gallagher said he's considering tweaking the film a little and making it available on Netflix or another web-based video streaming site. He's also in talks with PBS to have the documentary simulcast on PBS stations across the country.

"It's just a story about two people in love," he said.