Charities Win at Half Marathon
Votes

Charities Win at Half Marathon 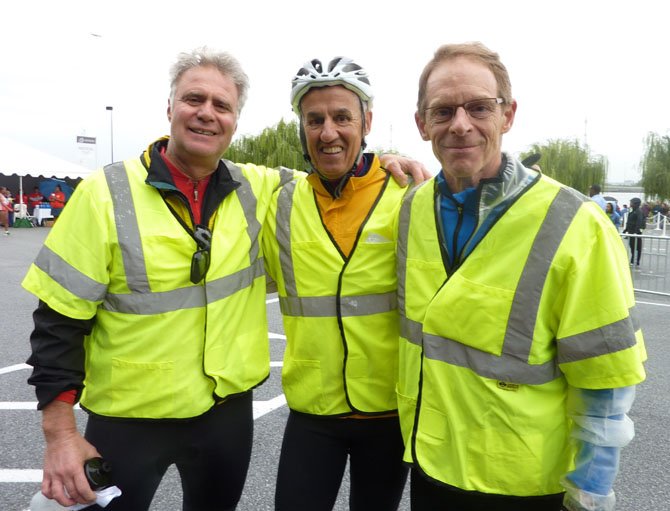 Dreary skies couldn't dampen the spirits of more than 3,000 runners who took to the streets of Virginia and Maryland Oct. 7 in the Woodrow Wilson Bridge Half Marathon, won by Kenyan Samuel Ndereba in 65 minutes and 15 seconds with American Kellyn Johnson leading the women in 1:13:24.

Charities Win at Half Marathon 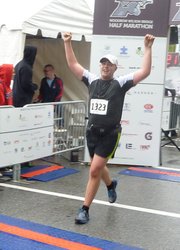 Dreary skies couldn't dampen the spirits of more than 3,000 runners who took to the streets of Virginia and Maryland Oct. 7 in the Woodrow Wilson Bridge Half Marathon, won by Kenyan Samuel Ndereba in 65 minutes and 15 seconds with American Kellyn Johnson leading the women in 1:13:24.

“I'm feeling pretty good,” said Alexandria's Edward Herty, a Navy lieutenant commander who finished the race in 2:27:07. “The weather the last couple of miles was tough but for the most part, it was an easy run.”

Now in its third year, the Woodrow Wilson Bridge Half Marathon attracted elite runners from around the world and awarded more than $15,000 in prize money to the top finishers.

“We're getting tremendous feedback,” said race director and founder Steve Nearman. “We got a lot of kudos for adding the Hoffman Town Center parking lot as a shuttle point. Buses are a huge logistical problem but I have a great team who not only executed the logistics well, but did it in the rain. They just nailed it today for the runners.”

With Alexandrians Tom Curcio, Ed Farino and Tom Swinson riding the pace bicycles for the lead runners, Ndereba , 35, ran head-to-head for much of the race with second place finisher Fernando Cabada (1:05:40), the American 25K record holder. Deteje Girma of Ethiopia was third in the men's division with a time of 1:06:08 followed by American Frank Dever (1:06:32) and Birhanu Tadesse of Ethiopia (1:06:53).

In the women's division, Johnson, 26, took a commanding lead from the start to become the first American woman to win the 13.1-mile race that runs from Mount Vernon Estate to National Harbor. She broke the tape two minutes ahead of second-place finisher Aziza Aliyu Abate of Ethiopia (1:15:24) and a mere 40 seconds off the course record set in 2011 by Bekelech Bedada.

Ethiopia's Wayinshet Abebe Hailu finished third in 1:15:44 with Johnson's teammate and 2011 RRCA Roads Scholar Megan Herrick coming in fourth at 1:18:19. Michelle Miller of Damascus, Md., rounded out the top five with a time of 1:19:57.

Ndereba and Johnson also were awarded the RRCA Virginia State Half Marathon titles, as were Masters winners Sergey Kaledin of Russia (1:15:43) and Kristin Markowicz of Arlington (1:26:58).

Winners of the Potomac Valley Association/USATF Half Marathon Championships were Miller and Devar. Masters champs were Markowicz and Joel Kinnunen.

“I have a great team who not only executed the logistics well, but did it in the rain. They just nailed it today for the runners.” — Race director Steve Nearman

The race also hosted the third NIB Visually Impaired Half Marathon Championships sponsored by the Alexandria-based National Industries for the Blind. Aaron Scheidies of Seattle (1:18:07), Matt Rodjom of Alexandria, (1:22:36) and Amy McDonaugh of Irmo, S.C. (1:23:58) led their peers and inspired other runners along the course.

“There has been an incredible outpouring of appreciation of what the vision impaired runners are doing,” Nearman said. “They are an inspiration to everyone in that race.”

In addition to the prize money for the runners, Nearman presented more than $14,000 to five local charities at a pre-race reception Oct. 6 at Mango Mike's Restaurant.

“We can't thank Steve enough,” said Rebuilding Together of Alexandria Executive Director Katharine Dixon, who accepted a check for $2,500 on behalf of RTA's veterans housing program. “Because of his efforts, we will be able to assist local veterans, active-duty service members and military families maintain safe and accessible housing.”

Other nonprofits receiving checks were the Child and Family Network Centers, Autism Speaks, Back on My Feet, Washington Area Women's Foundation and the RunningBrooke Fund.

“The checks we presented don't include any monies raised through our website,” Nearman added. “Awareness is a big thing for us so we maintain a 'run with a purpose' link that allows donations to be made directly to any of the charities. I don't have the numbers yet but the amount of money raised online is likely to be quadruple what we presented.”

With this year's race behind him, Nearman wasted no time in looking ahead.

“I've already submitted the permit applications to the Park Service for next year,” Nearman said. “I'm feeling very good about how my team executed on race day and am looking forward to an even better race in 2013.”