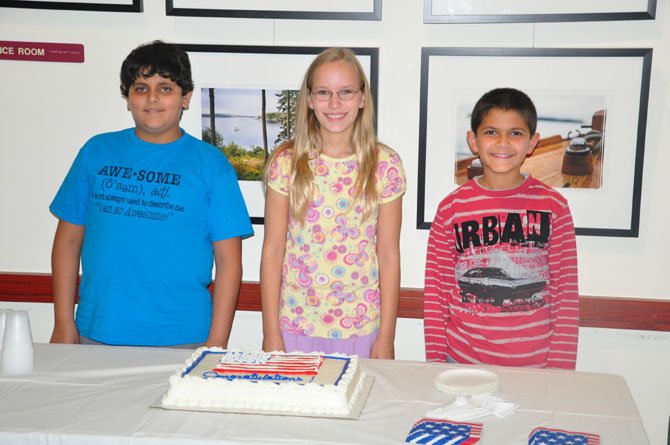 Students who participated spent their summer writing about a Virginia hero, using three of the words that are in the stones that surround the memorial. 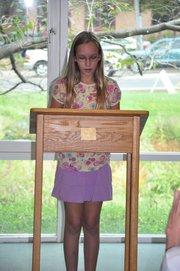 Kranking wrote her winning essay on Maggie Walker, the first female bank president and first female to charter a bank in the United States. Kranking cited Walker’s care, service and perseverance throughout her life in working for the equality of women and African-Americans.

“Because Maggie was such a caring person, she dedicated her life to service toward others,” she said.

In addition to founding a bank, Walker opened a department store, started a newspaper and continued her work even as her health declined and she became paralyzed late in life.

“Maggie accomplished these things with perseverance. During her life, she had to face many hardships…ten years before her death, her health started to decline. Maggie suffered from paralysis and spent the rest of her life in a wheelchair. Even though she had to face all this, she stayed involved in her services to her community until she died.” 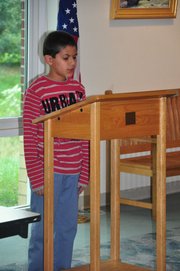 Sherwin Momenian, a student at Colvin Run Elementary School, reads his essay for the Friends of the Great Falls Freedom Memorial. Momenian wrote about Arthur Ashe for his essay, which won second place in the annual contest.

Momenian chose Arthur Ashe as his subject, calling him “caring, perseverant and courageous” due to his abilities to use his tennis success to fight against racism.

“This famous hero didn’t just want to be an athlete who just hit the ball. He wanted blacks to be a part of sports as much as whites,” Momenian said. “He wanted to put an end to the myth that blacks were inferior and passive.”

Momenian said he especially admired how Ashe never gave up, despite numerous obstacles. He cited Ashe’s march in Washington, D.C. in support of Haitian refugees, even while he was dealing with HIV.

“Arthur Ashe wasn’t just a tennis player or a great athlete. He was a hero to people all around the world,” he said. “He cared for blacks, he never gave up and his courage changed a lot of people’s lives. He always thought globally and nothing could stop him from pursuing his goals.”

The Friends of the Great Falls Freedom Memorial was founded in 2002, and the essay contest is part of the group’s three-pronged mission, which also includes maintenance of the memorial and coordination of the annual Memorial Day, 9/11 and Veterans Day ceremonies.

“This contest is part of our educational mission, where we promote the study of history and patriotism in the Great Falls area through the students that live here,” said Ed Heberg of the Friends of the Great Falls Freedom Memorial. “The library has given us great support, and is practically a co-sponsor of the event, since this is where students can do their research.”

The next event hosted by the friends will be their Veterans Day ceremony, which will be Monday, Nov. 12 at 11 a.m. at the Great Falls Freedom Memorial.