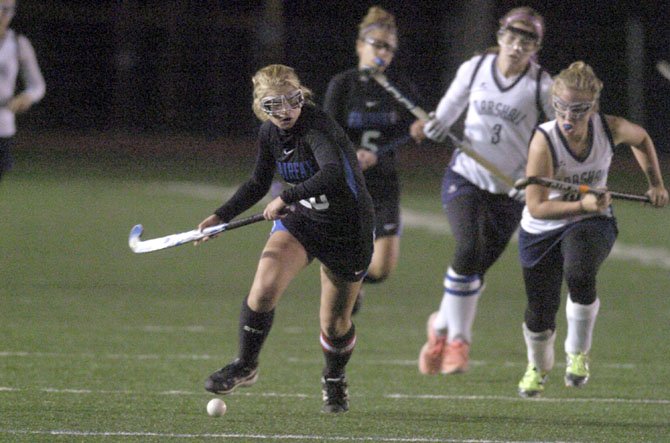 Katie Clark knelt on the sideline and emptied her emotions following the Marshall field hockey team’s regular season finale on Oct. 11. After a teammate consoled Clark, head coach Christina Carroll crouched by the senior midfielder and placed a hand on her head.

Marshall had just lost to Fairfax. It was Senior Night for the Statesmen, who failed in their attempt to beat the Rebels and earn the top seed in the Liberty District tournament, which comes with a first-round bye and automatic regional berth. Adding to Clark’s disappointment was the experience of playing against Fairfax captains Shannon Cosgrove and Sam Zelenack, who are club teammates with Clark and fellow Marshall captain Madeleine Lewsen.

"It’s really hard," Clark said after the game. "I have a lot of friends on the Fairfax team. I play club with them and it’s hard to play against them."

ALONG WITH PLAYER RELATIONSHIPS, Carroll and Fairfax head coach Amber Beaudoin are friends. Neither side was overly thrilled with having to complete against the other. Beaudoin said coaching against Carroll can be "awkward" at times. Cosgrove said playing against her club teammates is "tough because all four of us are really competitive." In the end, it was the Rebels that made the most of an uncomfortable situation, beating the Statesmen, 2-0, at Marshall High School.

"I think it [her goal] completely affected the game. I think we started dominating after that, especially at the end of the second half. We were moving the ball really well and that set the whole tone for the game."

Cosgrove scored on an assist from Zelenack with 8:41 remaining in the first half and junior Sara Allen added an insurance goal late in the second half as Fairfax improved to 15-1 and completed an undefeated run through the Liberty District. The Rebels’ last loss to Marshall came in 2010.

Cosgrove’s goal was her team-leading 15th of the season and proved to be the game-winner.

"I think it completely affected the game," Cosgrove said. "I think we started dominating after that, especially at the end of the second half. We were moving the ball really well and that set the whole tone for the game."

Fairfax junior Sara Allen scored a goal in the second half of the Rebels’ 2-0 victory against Marshall on Oct. 11.

Fairfax started the season 11-0 before suffering its only regular season defeat—a 3-0 loss to Westfield on Sept. 24. Cosgrove said the loss caused the Rebels to address their sub-par practice habits. Beaudoin said it gave younger players a taste of adversity.

"We have a lot of sophomores on our team and they just don’t understand that things aren’t always going to be awesome," the coach said. "When you lose like that…it makes them have to work."

Marshall finished the regular season with a 12-4 record and earned the No. 2 seed in the Liberty tournament with a 4-2 district mark.

Lewsen, who finished the regular season with 10 goals, said Marshall will use the loss to Fairfax as motivation in the postseason.

"The drive is all there and the want to win is all there," she said, "especially now that we have this loss on Senior Night."

Fairfax and Marshall each won their district tournament games and will meet for the district championship at 6 p.m. on Friday, Oct. 19 at Marshall High School.

"It’s so emotional for so many different reasons—but for Senior Night, specifically," Carroll said after Marshall’s loss to Fairfax on Oct. 11. "We tell [the players] that we’re still in it, we still have a season.… We need to pick up the pieces and go. So what? We didn’t get the automatic [berth] into regionals and we have to work for it. It’s OK. We can do it.…

"I was just saying [to Beaudoin] that we’re in the same situation every year playing for first place. One of these times, I’d just like to beat her."