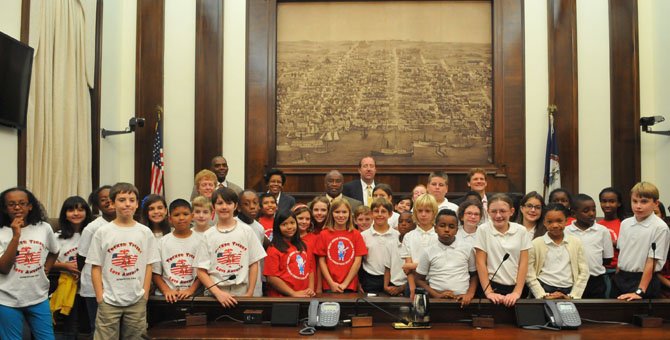 Alexandria — Mayor Euille presented an official proclamation to Linda Greenberg, a member of the John Alexander Chapter of the DAR commemorating Constitution Week, Sept. 17 – 23, in Council Chambers in City Hall.

Virginia played a pivotal role in the writing of the Constitution. James Madison and George Mason shaped the Virginia Declaration of Rights and the Virginia State Constitution, and Thomas Jefferson referred to these documents when he finalized the Constitution of the United States. All three focused on self-government by the people, on the inalienable rights of individuals, and the importance of law in protecting those rights.

Mayor Bill Euille presents the official Constitution Week proclamation to Linda Greenberg, a member of the John Alexander Chapter of the DAR.