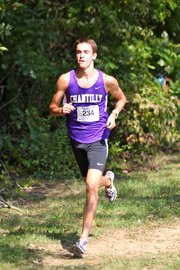 Fairfax Station — Sean McGorty is focused on himself as he enters the 2012 cross country season.

McGorty has been one of the top high school harriers in Virginia since his sophomore season, when he finished fourth at the 2010 VHSL state meet. In 2011, he finished state runner-up. Each year, however, McGorty was surpassed by fellow Northern Region runner Ahmed Bile, who won back-to-back state championships as a junior and senior. While McGorty couldn’t catch Bile at states, the Annandale harrier pushed McGorty to succeed.

This year, Bile, who is now a freshman at Georgetown, won’t be there to motivate McGorty. Instead, McGorty, who was ranked in the milesplit.com preseason national top 10, is looking for drive from within.

On Sept. 8, McGorty cruised to victory at the Monroe Parker Invitational at Burke Lake Park, posting a time of 14 minutes, 50 seconds. He finished 26 seconds ahead of his nearest competitor and helped Chantilly capture the boys’ team title.

“You have to be very mentally strong,” McGorty said of running with no competitors around him. “I’ve been working on that coming into this year because I really want to be able to motivate myself during races and not rely on other people or other events. … It will be a little different not having someone right there with you. Mentally, last year I had to focus on staying with [Bile] or pushing the pace, trying to beat him. This year, it’s more pushing myself, keeping myself motivated …”

“You have to be very mentally strong. I’ve been working on that coming into this year because I really want to be able to motivate myself during races and not rely on other people or other events.” 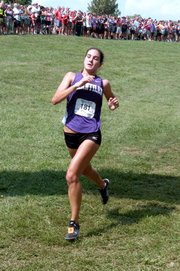 Lake Braddock senior Sophie Chase, ranked in the milesplit.com national top 10, pulled out of the race around the halfway point with lower-body discomfort. Lake Braddock coach Michael Mangan said it was his choice for Chase to withdraw from the race and said “it’s not a big deal.”

“I’m a bad coach if I let her keep going,” Mangan said. “Had she not listened to me, I’m not very fast anymore, but I probably could have summoned 25 [or] 30 meters of a sprint and I would have hooked her.”

An emotional Chase was disappointed she wasn’t able to finish.

“I’m not really injured, I just was not feeling good at all,” Chase said. “The top part of my [right] hip was really, really hurting … so coming up that hill I really had an option whether to try to gut it through and possibly … irritate my legs more [or] stop. It was definitely a really difficult thing to decide because I’m a fighter and I want to do well, but at the end, I have a really long season and I just have to stay focused for the long run.”

Despite Chase’s early exit from the race, Lake Braddock captured the girls’ team championship, thanks in part to Hannah Christen winning the individual title. Christen, ranked in the milesplit.com national top 15, finished with a time of 17:40. She battled West Springfield’s Caroline Alcorta, who placed second at 17:46.

“It felt really good,” Christen said of winning the individual title, “especially because I had to fight for it at the end, which made it seem more worthwhile.”

Multiple harriers needed medical attention due to the warm temperature.

“It was really, really hot,” Wittich said. “It was brutal.”