A journey that heals the soul. 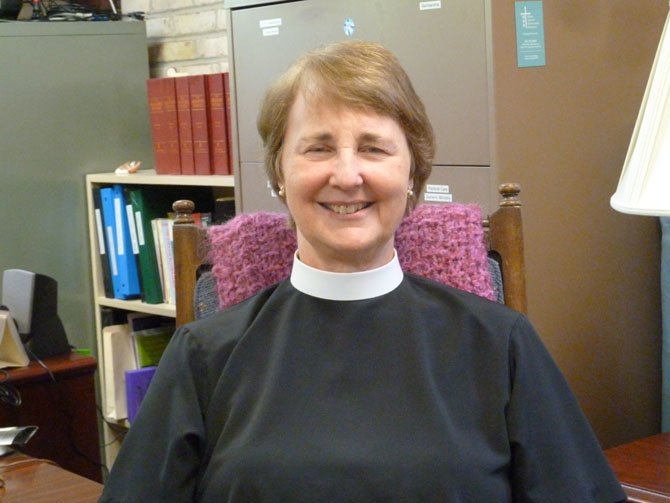 Potomac — The day before Potomac’s St. James Episcopal Church Rector the Rev. Cynthia (Cindy) Baskin and her husband Bob were to leave on their once-in-a-lifetime 480 mile pilgrimage through northwestern Spain, she was diagnosed with a stress fracture in her left foot. After consulting her orthopedist, the couple decided to go forth with modified plans — they departed a day later, altered the amount of walking they would do, arranged for alternate transportation and added a walking boot to her carefully packed backpack. One of the challenges of planning for this type of travel is that they could only bring what they could carry on their backs.

The couple departed for Madrid just two days after her diagnosis. They added train and bus transportation for part of the route – but Baskin still wanted to walk as much of the pilgrimage route as possible. Through sheer determination and dedication, she trekked over 200 miles, and her husband Bob completed more than 400 miles of the sacred walk.

The Way of St. James is the pilgrimage route to the Cathedral of Santiago de Compostela in Galicia in northwestern Spain, where the remains of the apostle Saint James are said to be buried. Thousands of people complete the journey every year for religious reasons, travel, sport — or simply for the challenge of walking for weeks in a new country. The Baskins chose to walk the pilgrimage because of the personal significance of the pastor of St. James Episcopal following the Way of St. James. They also did it to take a breather from the hustle and bustle of modern life — to slow down, get back to nature and enjoy a more simple life for 6 weeks.

“We walked an average of 8 - 12 miles a day,” said Baskin. “Along the way, we met interesting people from every country in the world. There were not many Americans, but we met people young and old. The whole point is to slow down and to get in touch with your own self. I’m still mulling and reflecting on the revelations that came from this trip.

“I developed knowledge of my own personal limits — and that I am OK with them. Some people could go much faster and farther in a day, but I came to understand that I’m just happy that I could be doing the walk in my own time. It’s truly about the journey — the people you meet along the way and the attachment to the earth. It’s about getting in touch with myself, and with others.”

They observed a number of solo walkers as well as many groups of Roman Catholics with a monk or a priest. Baskin noticed that she was never worried about personal safety along the trail. “The other walkers making the pilgrimage were kind and helpful and we developed a sense of camaraderie. When we retired for the night at an inn or a hostel, the innkeepers were just remarkable and so caring. They tried to make our stay as pleasant as possible.”

“People always told me the pilgrimage would be a transforming experience — but they never said how,” said Baskin. “It’s truly something to live the experience. When I returned, I changed my entire way of living and am now focusing on living healthier and staying physically fit. I joined a gym and swim and cycle 5 days a week.”

Some revelations from her trip: “I was surprised by the number of small villages in Spain that have enormous gothic cathedrals and churches. All are exceptionally ornate. It demonstrates the tremendous sprit of each village. The church or cathedral is truly the community center of their village. I was also impressed by their slower, simpler life. Everything literally shuts down from 3:30 -5:30 when everyone takes their siesta and then businesses open again. I was pleased with their emphasis on conserving electricity — from their windmills to the light switches that demand the door key in order to turn on the power.”

Baskin explained that the pilgrims carry the credencial or the “Pilgrim’s Passport” which is stamped with the official St. James stamp of each town or Refugio at which the walker stays. It provides walking pilgrims with a record of where they ate or slept, but also serves as proof to the Pilgrim's Office in Santiago that the journey was accomplished according to an official route.

The compostela is a certificate of accomplishment given to pilgrims on completing the Way. Pilgrims arriving in Santiago de Compostela who have walked at least the last 100 km, or cycled 200 km to get there (as indicated on their credencial), are eligible for the compostela from the Pilgrim's Office in Santiago. A Pilgrim's Mass is held in the Cathedral of Santiago de Compostela each day at noon for pilgrims. Pilgrims who received the compostela the day before have their countries of origin and the starting point of their pilgrimage announced at the Mass.

Baskin summed up the Pilgrimage: “I was moved by the beauty of the land and the rural landscape — it spoke to my heart. The beautiful land was healing to my soul.”