But General Assembly stays in the red column. 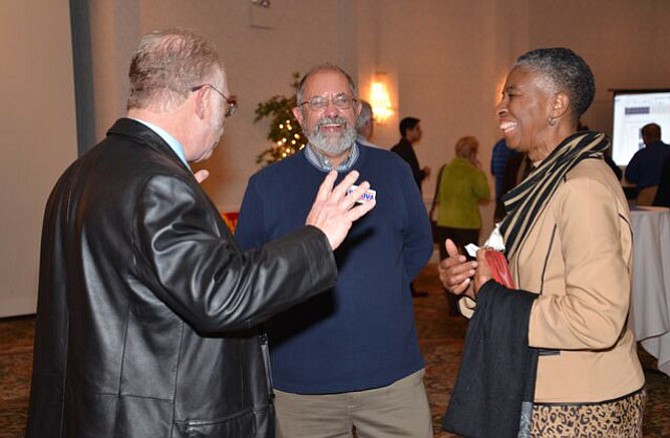 Supervisor Cathy Hudgins (D-Hunter Mill) can relax and share a smile with other attendees of the Election Watch Party — she won re-election to her seat with more than 94 percent of the vote and her only competition came from undeclared write-ins. Photo by Andrea Worker.

“We didn’t win the war tonight, but we did come out ahead in some of the important local battles, and that’s a good start.” That was Roger Kline’s take on the results of the elections for Virginia’s General Assembly, Fairfax County Board of Supervisors, and School Board members. Kline was one of hundreds that gathered at The Waterford at Fair Oaks for the Fairfax Democratic Committee’s Election Watch Party on Tuesday night.

Although the doors to the Watch Party opened at 7 p.m. just as the polls were closing, things didn’t really get underway until closer to 9 when the faithful and those they supported began to arrive in earnest.

Monitors in the corners of the room were constantly surrounded by attendees checking the latest results.

“It’s enough to give you an ulcer,” said Aida Lee, referring to the see-sawing numbers that were coming in early on for Del. Kathleen Murphy (D-34) whose district includes part of Loudoun County, and Great Falls, McLean, Wolftrap and Langley in Fairfax County. When 100 percent of the votes were finally reported, Murphy was leading her opponent Craig Parisot, whom she had previously defeated for the seat in a special election. But with a winning margin of less than 200 votes, less than one percent, election officials plan to review the votes on Wednesday to determine if a recount will be called for.

THE ‘WAR” that was not won on Tuesday was the Democrats’ fight to gain control of the Virginia Senate. Prior to the election Republicans held the majority, 21-19. Because of the tie-breaking powers of democratic Lt. Gov. Ralph Northam, the Democrats only needed one more seat to gain control.

Democratic candidates prevailed in several hotly contested races, but at the end of the day the total numbers remained unchanged. With an overwhelmingly Republican House and a continued GOP “tilt” in the Senate, Gov. Terry McAuliffe and his party face uphill battles at every turn in their attempts to press forward their priorities, including gun safety regulations and the expansion of Medicaid in the Commonwealth.

Senate Minority Leader Richard Saslaw (D-35), who defeated his Independent Green Party opponent Terry W. Modglin 73.45 percent to 25 percent, addressed the crowd when he introduced the winning senators and delegates who were present at the Watch, telling them to not lose hope yet.

Saslaw said there’s a chance that results from one Richmond-area race might be reviewed. “There’s something not right with those numbers,” he said, citing “unusually high” Republican turnout in Powhatan County.

VICTORY BY Jennifer Boysko in the 86th district was one of the “important local battles” that attendee Kline cheered. Boysko replaces retiring Republican Del. Tom Rust, defeating Danny Vargas (R). Boysko was greeted by thunderous applause as she joined her Assembly colleagues on stage. “It’s already been an incredible learning experience,” said Boysko, in an interview after the formal election result announcements had been made. “I’ve talked to literally thousands of people in my district, listening to what they need, what are their concerns,” she added. “There’s a lot to do, but education kept coming up as a real priority.” Boysko said she is looking forward to the challenge ahead and hoped to become a part of a “civility caucus.” “I think a lot more can be accomplished when we treat each other with dignity and respect.”

Vargas, Boysko’s opponent received large, late infusions of campaign money from Republicans, and had a total of $705,323, which he spent mostly on mailers and TV commercials that were unflattering and critical of Boysko.

All eyes were also following the race in neighboring Prince William County between Harry “Hal” Parrish II and Jeremy McPike. McPike, who received personal support from Gov. McAuliffe at the polls on election day, beat Manassas Mayor Parrish by a margin of more than 16 percent.

Democrats also took the upper hand in the results for the Fairfax County Board of Supervisors. By re-electing all eight incumbents, including Chairman Sharon Bulova, and adding the Democratic candidates for the vacant seats in the Mount Vernon and Sully districts, the voters gave the board one more Democratic member than they had originally. When the new board takes office in January, incumbents Pat Herrity of the Springfield District and John C. Cook from the Braddock District will be the only Republican members of the governing body of Virginia’s largest jurisdiction. The Sully District seat, formerly held by Supervisor Michael Frey (R), was won by School Board member Kathy Smith (D) over Republican John Guevara. Another School Board member, Dan Storck, took the Mount Vernon Supervisor contest over Jane Gandee (R), replacing the retiring Gerry Hyland (D).

Democratic Fairfax County School Board election winners were also on hand at the event and took to the stage when introduced by Board of Supervisors Chairman Bulova. Ryan McElveen and Ilryong Moon retained their At-Large positions, while Ted Velkoff lost his seat to Republican-backed Jeanette Hough of Fairfax. Pat Hynes remains as the School Board member in the Hunter Mill District. Jane Strauss retains the position she has held for two decades for her Dranesville constituency. In the Sully District contest for School Board, Republican Tom Wilson was ahead of Karen Keys-Gamarra by about 200 votes.

POLITICAL NEWCOMER Dalia Palchik, the Providence District School Board member winner over incumbent Patty Reed, received the evening’s most enthusiastic reception. When asked if it was possible that she knew every single person in the room in order to receive such a welcome, Palchik laughingly replied, “Could be.” The young teacher said she “made a pilgrimage in the streets of Providence District” likening her journey to her experience on the famous pilgrimage route from France to the cathedral in Santiago de Compostela, Spain. Humbled by the response from the crowd, Palchik says she truly loves people and tries to show it when she meets them. “Less testing and more teaching” are battles cries for Palchik, who said she was ready to represent a diverse community “after I get just a little bit of sleep.”

A full list of all of the races and the results throughout Virginia are available at www.results.elections.virginia.gov.