Centreville — When Scott Phillips first came to Stone Middle School some 11 years ago, it was jammed to the rafters with 1,350 students. Then Liberty Middle opened in 2002, and Stone’s enrollment dropped significantly.

Now, at the start of the 2012-13 school year, it has just 821 students. And according to Phillips, beginning his fifth year there as principal, “This is the smallest number of students we’ve ever had. We’re the fifth-smallest middle school in Fairfax County.”

“Most of the neighborhoods on this part of Route 29 are single-family homes,” he explained. “The kids are still in high school and college and the houses haven’t turned over as much.”

Meanwhile, said Phillips, Stone has “lots of returning families” at the school. It also has five new teachers. Science instructor April Walker is a first-year teacher who student taught at Centreville High and Union Mill Elementary, so she’s familiar with the local area.

“New ESOL teacher Tim Hoffman lives a block from the school,” said Phillips. “His son graduated from Stone and is now a Westfield High ninth-grader. New math teacher Patrick McElveen is an eight-year teaching veteran and will teach seventh-grade math and honors algebra.”

Luann Hoyseth is a product of Fairfax County’s LEAD program and will be an administrative intern at Stone. And Jimmy Bochert, the new technology specialist, comes to the school after doing that job, the past six years, at London Towne Elementary.

Phillips is also excited about a new technology initiative this year at Stone. “We’re one of two schools in the nation piloting a Droid tablet sponsored by the software company, Kajeet,” he said. “About 125 of our eighth-graders will use them in their core classes. They’re small — about 7 inches — and portable, and they have a touch screen and a lot of capabilities.”

“Two of our math and social studies textbooks are online, so students can access them via these tablets,” continued Phillips. “There are also a number of educational applications students can use on them. For example, there’s a spreadsheet creator, plus a calculator app so they don’t have to buy a $200 graphing calculator.” 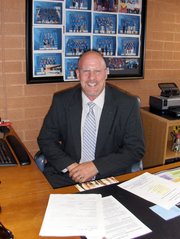 Stone is also doing a small, iPad pilot program for students with autism. “Their educational needs are pretty strong and they need a lot of support during the day,” said Phillips. “And research shows that the touch screen and tactile element of it is very beneficial to them. And reading and math applications that, in the past, we would have done hands on are now visual, iPad technologies for non-communicative students or those struggling with communication.”

In addition, the school is employing a positive-behavior approach to reinforce what students do right. “It’s explicit about expectations in every area of the building and clear about consequences when rules are broken,” said Phillips. “So this is just refining what we’re already doing.”

Stone is also starting something tentatively called the Galaxy Program for students eligible to attend “advanced academic” – the new name for GT – centers. Instead of taking classes at Rocky Run Middle School’s center, they may now attend them in place at Stone. Or they could be identified as Young Scholars.

“Essentially, we’ll run an enrichment program for them consisting of a couple activities each quarter,” said Phillips. “Some examples are project-based learning, cultural events and career readiness, with a focus on STEM – science, technology, engineering and math.”

Last Wednesday, Aug. 29, was Panther Prep Night, when the students picked up their class schedules and P.E. uniforms and parents signed up for the PTA. They also got to meet and speak with Phillips and listen to the after-school specialist talk about after-school activities.

“Schools are cyclical and every year is a new start,” said the principal. “What I enjoy most is when I know a family and then get to meet their younger siblings. I also like meeting families new to the area – people who don’t realize how good Fairfax County public schools are; that’s always neat.”

Phillips also extended an invitation to parents to attend Back-to-School Night at Stone, next Thursday, Sept. 13, at 6:15 p.m.