This annual award is presented to the DC area running store with the fastest combined team time during the October running of the MCM. Team scores are calculated by combining the individual chip times of the top three finishers, including at least one male and one female. 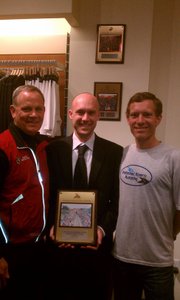 Toland was amazed by such a decisive victory. “Wow, I didn’t realize the gap was that large. We had a great team this year. Perry was the key to our win. She had an incredible day.”

Selection for the team began in June, according to team coordinator Ecris Williams. “I sent out a mass email and put out the qualifications on Facebook,” she said. “There were 89 people on the list. From that, we were able to create a few teams this year.”

“The MCM has a mission statement that includes promoting community goodwill, and that’s just what we’re doing here tonight,” said Nealis. “These running stores embody the core of our sport and continue to provide support to runners of all experience levels.”

The 38th Marine Core Marathon is set for Sunday, Oct. 27, of this year in Arlington. It has been voted the “Best Marathon for Families” and the “Best Marathon in the Mid Atlantic," as well as the largest marathon not to offer prize money, earning the name “The People’s Marathon." No federal or Marine Corps endorsement is implied.