Easter at The Falls
Votes

Easter at The Falls 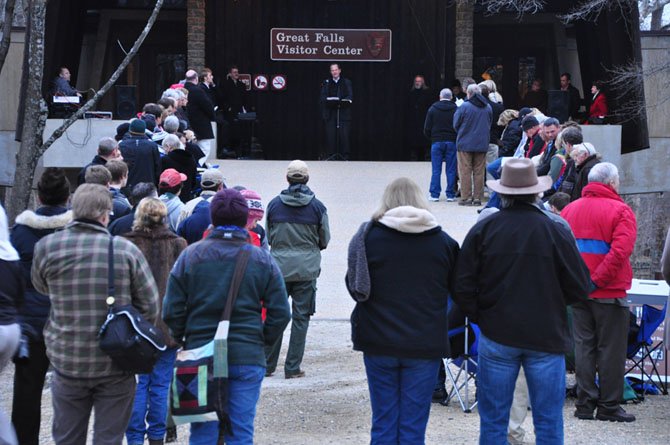 Great Falls — Dozens of people gathered at Great Falls Park before sunrise Easter Sunday, using flashlights to walk the path from the parking lot to the visitor center. At an hour usually reserved for only staff members, the Great Falls Ecumenical Council held its annual Easter Sunrise Service in the park.

Ronald Adkins of Vienna says Great Falls Park is one of his favorite places in the area, and he has made the early morning trek with his family for several years now. 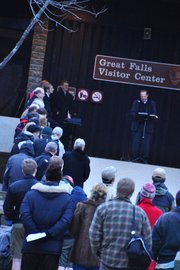 “I’ve always thought of it as a great, simple, spiritual way to start a Sunday that’s meant to be spent that way,” he said. “When our kids were younger, it was a lot of Easter Egg hunts and running to visit family members, making sure we got in all the necessary face time. Now my wife and I can come here and spend the rest of the day at a slower pace, it really puts you into a less hectic frame of mind.”

Members of the Great Falls, Smith Chapel and Andrew Chapel United Methodist Churches, as well as the Dranesville Church of the Brethren, Salem Baptist Church and Faith Bible Church all participated in the service.

“I’ve always really enjoyed the interfaith aspect of this service, I think Easter, no matter what your belief, is a time for unity,” said Jeremy Meier of Great Falls. “Every headline and news broadcast seems to scream about problems, but when you’re surrounded by the sounds of the falls and people who are here for the exact same reason you are, it’s hard not to find some solace and peace.”

The sky began to lighten into a uniform gray color, without the sun’s appearance, and the daylight revealed an overcast day.

“I was really hoping for a nice orange sunrise, but the clouds got in the way of that,” said Stephanie Sarmasu of Great Falls. “But it was still a great way to spend the morning, it was really neat to start the day with a like-minded community in one of the most beautiful natural settings in the world.”

After the service concluded, most people headed for their cars to resume their day. But some remained at the park, deciding to spend at least the first part of their day walking the paths of the park.

“We’re probably going to walk for a few hours, given that the temperature isn’t too low and any rain seems to be holding off,” said Tommy Garrett, who came with his brother and sister-in-law, who he is visiting from Ohio. “This is my first time in the park, and I’m pretty blown away, so I’m very interested in seeing what this park has to offer. We don’t have dinner planned until 3 p.m., so maybe we’ll make a day of it.”