British flags fluttered against the façade of the historic Carlyle House as re-enactors set the stage for a living history dramatization of the meeting held here on April 14, 1755. Inside the house 258 years ago, Major General Edward Braddock, Commander of His Majesty’s Forces in North America met with governors of the five colonies, Massachusetts Bay, New York, Pennsylvania, Maryland and Virginia to plan and finance a military campaign to defeat the French forces at the forks of the Ohio River near Fort Duquesne. Braddock chose John Carlyle’s house as his residence while his 800 soldiers were garrisoned in town.

Children and guests are entertained with 18th century games and toys on the front green of the Carlyle House on North Fairfax Street last Saturday afternoon. 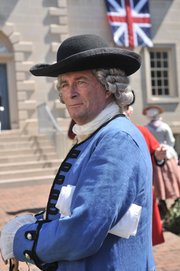 Rich Fox appears as Virginia Gov. Thomas Dinwiddie for the re-enactment of the “Grandest Congress.” 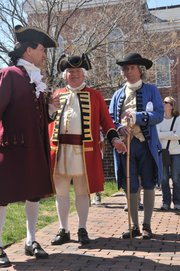 Kim Walters prepared a feast for the re-enactors using 18th century cooking techniques in the river garden at the Carlyle House. 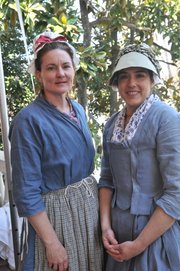 Kim Walters takes a respite from cooking as the guests begin the first course of their luncheon, a bowl of spring soup. With Walters is Gemma Gonzalez. Gonzalez prepared the table for the luncheon banquet.

Inside, Sarah Carlyle (Teresa Martinez) works on a bit of sewing with her friend Parthania Alexander (Kerry McClure). 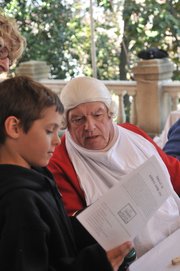 Major General Edward Braddock (Daniel McMahon) takes time from his meal to introduce a young visitor to all the governors dining with him at John Carlyle’s home.