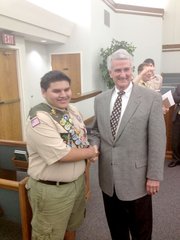 Eric Hepfinger, 14, of Herndon, received his Eagle Scout award on Sunday, April 14. He is pictured with Del. Tom Rust (R-86).

Eric Hepfinger is a 14-year-old member of the Boy Scout Crew 878, a freshman at Herndon High School and now, an Eagle Scout. Eric, of Herndon, received his Eagle Scout award on Sunday, April 14, at a Court of Honor held in Reston at which Del. Tom Rust was the keynote speaker. For his Eagle project, Eric organized a food drive on behalf of the LINK food bank in Herndon.