‘We Have Not Forgotten’
Votes

‘We Have Not Forgotten’ 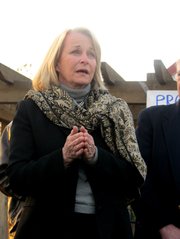 McLean resident Kathleen Murphy spoke about losing her brother 11 years ago to gun violence. She was one of several speakers during the April 13 candlelight vigil in Vienna urging Congress to support stricter gun control measures.

“We need to send a strong message to Congress that we have not forgotten Newtown. We have not forgotten Virginia Tech,” said Pat Carol of Franconia, who attended the rally with her two teenage children. “ … It’s time to demand that (legislators) protect our children, instead of the gun lobby.”

The event was part of a series of rallies this month co-hosted by Organizing for Action (OFA) — a social advocacy nonprofit that supports President Barack Obama — and Mayors Against Illegal Guns, a bipartisan coalition of 900 mayors co-chaired by New York City Mayor Michael Bloomberg.

Both groups are calling for stricter gun laws, including background checks for all gun sales, gun safety training for all firearm buyers, and a ban on military-style assault weapons.

Vienna resident Sue Langley, a community activist with OFA of Virginia, organized Saturday’s event, which began at 7 p.m. and ended with a candlelight vigil to remember the children of Newtown, and the estimated 32,000 Americans who die in gun-related deaths every year.

“The Senate will be in its final stages of debate this week, and by standing together we'll make sure they know how many people are behind them in passing legislation,” Langley said.

What motivated you to attend the candlelight vigil? 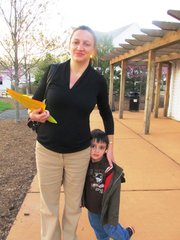 “Eleven years ago my brother was murdered. He was 50 years old, and he had a wife and five children. He was shot during a robbery,” said McLean resident Kathleen Murphy, choking back tears.

“This is personal for me, not politics,” said Murphy, who launched a bid to challenge Del. Barbara Comstock (R-34) in this November’s House of Delegates election. Murphy, a mother of six children, implored the crowd to keep the pressure on Congress to support measures such as expanded background checks. “We are going to hold them responsible,” she said.

In an emotional speech Earle Mitchell of Springfield, a retired U.S. Navy supply officer, told the crowd that, as a member of the military, “we were always looking for foreign enemies. The enemy I’m talking about is the NRA headquarters on I-66.” 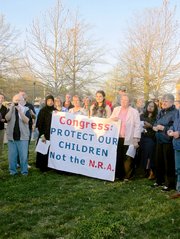 “It’s been only four months since 26 children died in Newtown, and we’ve had 3,300 gun-related deaths,” Mitchell said. “I have young grandchildren, who all live in Virginia. Newtown could happen here. When will we say ‘enough’?”

The event began with a Franciscan blessing read by John Horesji of Vienna, coordinator of Social Action Linking Together (SALT). 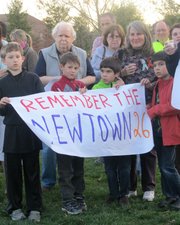 Children hold up a sign — “Remember the Newtown 26” — while listening to speakers during a candlelight vigil in Vienna Saturday, April 13, urging Congress to support stricter gun control measures.

Del. Ken Plum (D-36) and Purcellville Mayor Bob Lazaro were the only political leaders to attend the event. Lazaro is a member of Mayors Against Illegal Guns.

Under current federal law, only licensed firearms dealers are required to conduct background checks on potential buyers, according to a report from Mayors Against Illegal Guns. Around 40 percent of U.S. gun transfers are conducted by unlicensed “private sellers” who are not required to conduct a federal check, and who often do business at gun shows and on the Internet — indicating that about 6.6 million guns are transferred in the U.S. every year with no background check for the buyer.

“This ‘private sale loophole’ a people who are already prohibited from buying guns — including felons, domestic abusers and the seriously mentally ill — to avoid a background check by simply avoiding licensed dealers,” according to the report. 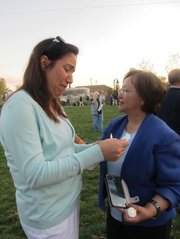 Sue Langley, a Vienna resident who organized the April 13 candlelight vigil, comforts preschool teacher Raba Letteri, a Lebanese immigrant, who attended the vigil with her husband Paul and sons Joseph, 13, and Aaron, 9.

Lu-Ann McNabb, a Centreville resident who was instrumental in starting the Angel Fund in memory of Reema Samaha, one of 32 students killed during the April 16, 2007 Virginia Tech shooting, also spoke at the event.

“During Reema’s funeral, her mother said to look at her hands, because they were unscathed. But I kissed her forehead, and I could see the exit wound,” McNabb said. “How can we continue to let our children be victims?”

Raba Letteri, a Reston preschool teacher, burst into tears after the vigil.

“I came here from Lebanon to be safe. I saw the hatred and violence between Arabs and Jews. Now everything I hear on the news is about a shooting. I don’t need to wait to lose one of my children to have a voice,” Letteri said.

“The American people have made it clear where they stand,” Langley said. “They want a response to the tragedies caused by gun violence.”