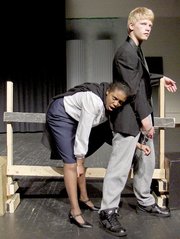 Actors Binta Barry (left) and Connor Mitchell rehearse a scene from “The 39 Steps.” 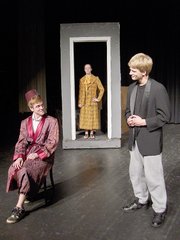 Presenting a spoof of the works of Alfred Hitchcock, Centreville High will perform “The 39 Steps.” The curtain rises Friday-Saturday, April 26-27 and May 3-4, at 7:30 p.m. Tickets are $10 at the door and via www.theatrecentreville.com.

The story’s based on the 1935 British thriller, but takes a huge turn into hilarity. “This play roughly follows the screenplay of the film,” said Director Mike Hudson. “But that’s a serious spy movie, whereas this is absolute slapstick.”

He said the show contains nonstop action and lots of physical comedy, “so the audience should howl with laughter. We have an incredibly talented group of kids — a mix of veterans, plus new performers, so we have a lot of good prospects coming up for next year.”

The story takes place in 1935 England and Scotland, and The 39 Steps is a top-secret German organization collecting information. There’s a backdrop of the backstage of a theater because the characters are all actors. And two of them, Santiago Jauregui and Marcus Schmidt, play several different roles.

The cast and crew of 26 have been rehearsing since February, and senior Ashley Rosenstein created the costume design and put together all the outfits. It’s also a show that hasn’t been performed before for local audiences.

“They’re going to love the crazy antics of the characters as they chase spies across the face of England,” said Hudson. “The physical comedy will catch them off guard and, when this all comes together, it’s going to be wild.”

Senior Daniel Lindgren plays Professor Jordan. “He’s a college professor and the stereotypical, old-time, movie villain,” said Lindgren. “Being a professor is his cover. He appears to be a good guy, but there’s more to him than meets the eye.”

Lindgren’s previously done more serious roles, so he’s having fun doing something more comedic. “It’s a different type of energy,” he said. “I get to use a prop gun and, because the professor is such a caricature, I also get to overact.”

Since this show spoofs spy movies, said Lindgren, “It’s over-the-top ridiculous. And the audience will like the references to Hitchcock and the fresh take on a tired genre.”

Senior Binta Barry portrays Pamela Edwards. “She’s an innocent bystander that Richard Hannay, who’s on the run, pulls into his shenanigans,” said Barry. “She works and is young, attractive and single. She’s also headstrong and set in her morals and doesn’t appreciate things being taken lightly. Her uncle is in Scotland Yard, so she’s strict and stern and doesn’t like Hannay.”

Barry calls Pamela almost an exaggeration of herself, so she likes playing her. “This play’s a farce, but her character isn’t. And it’s fun to play off Connor [Mitchell], who plays Richard, because the characters are so opposite.” She said the audience will enjoy the show’s “in-your-face humor,” as well as the “nice mix of experienced and newer actors in the cast.”

Also important to the play is tech crew member Jeremy Smith, a senior, who’s this production’s gun wrangler. “I train all the actors how to safely check, clear and discharge their weapons,” he said. “They use blank-firing guns, so I also teach them the four cardinal rules of firearm safety.”

He said these rules are: “All guns are always loaded; never point a weapon at anything you’re not willing to destroy; keep your finger off the trigger until you’re pointing downrange at your target; and know your target and what’s beyond it.”

Smith was trained in theatrical firearm safety by three of the 17 fight masters in the U.S. with the Society of American Fight Directors. “This is my seventh show,” he said. “I enjoy doing this because I get to put my knowledge to use and I like working on the theatrical productions here.”

Portraying Richard Hannay is junior Connor Mitchell. “He’s lived a good life so far, but then it comes to a halt. He becomes bored with it and wonders what his purpose is,” said Mitchell. “Then he meets a woman named Annabella and begins to fall for her. And she starts to involve him in a plot to help stop the Germans from taking military secrets out of Great Britain.”

Mitchell called Hannay funny and said he “cracks jokes to lighten awkward situations. But deep down inside, he’s a serious person and will do what needs to get done. He’s a good guy thrust into a tumultuous situation. He’s fun to play because he’s got so many aspects to his personality. I also like showing the different ways he treats other people, depending on who they are and his emotional state at the time.”

As for the play, said Mitchell, “The audience will love all the action. Stuff is constantly happening — they won’t know where to look. There’s a lot of energy in the show and it’s very entertaining to watch.”