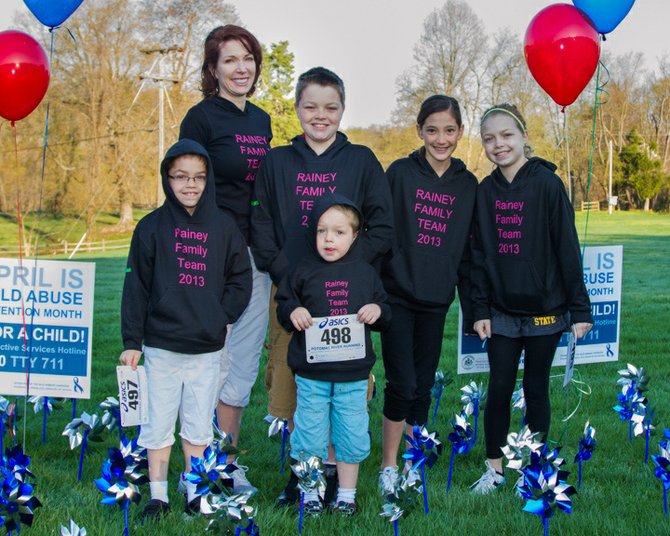 SafeSpot founding board member and mom Bridget Rainey and members of The Rainey Family Team, all of Great Falls, huddle among the blue and silver pinwheels “planted” in the grass near the Champions4Children Race location at Lake Fairfax Park in Reston.

April is Child Abuse Prevention Month, which helps explain why 300 runners gathered at 9 a.m. at Lake Fairfax Park in Reston, grouped in teams with names like "Peggy's Posse," "Kids4Kids" and—a favorite—"Team Baxter" (named after organizing member Kim Roellig's dog) on Saturday, April 13. The group of running teams present were there under the auspices of the first Champions4Children 5K Walk/Run, hosted by what will be the county's first child abuse investigation center, the SafeSpot Children’s Advocacy Center of Fairfax. 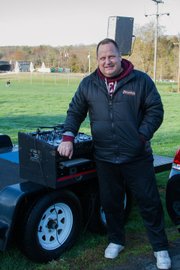 Jon Paul, owner of Megawatt, brought his equipment and his skills to the race to provide musical encouragement to runners and walkers. Jon Paul and his wife live in Great Falls.

While 15 other jurisdictions throughout the commonwealth have created children’s advocacy centers for their child abuse victims, Fairfax County, the state’s wealthiest and most populous county, has none.

State Senator Janet Howell (D-32) told the crowd, “I have long supported programs that protect children from abuse. I am committed to supporting a new child abuse investigation center for Fairfax County and will continue to advocate for funding for this important facility.”

Fairfax County Child Protective Services investigated and assessed nearly 2,600 cases of child abuse and neglect in 2011. Currently, the county does not have a center where child victims can feel safe to disclose their trauma and receive assistance and therapy that will help them heal. Money raised by the Champions4Children Walk/Run will aid efforts to open a new center for Fairfax children as soon as possible. 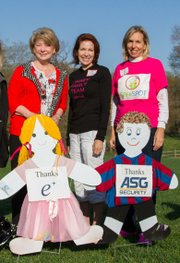 State Senator Janet Howell (D-32), left, with SafeSpot founding board members Bridget Rainey (center) and Bootsie Humenansky (right), both of Great Falls. Senator Howell, a long-time supporter of the children’s advocacy center concept, spoke to the crowd of nearly 300 runners at the start of the race.

Nationally, statistics show there are 3 million reported cases of abuse annually. One in four girls and one in six boys will experience sexual abuse before age 18. “This is a problem in our community that cannot be ignored,” said Bootsie Humenansky of Great Falls, co-founder of SafeSpot CAC. Safespot is a newly formed nonprofit whose mission is to partner with Fairfax County professionals to provide a safe, child friendly place where child abuse investigations can take place and where victims and their families can receive follow-on therapy and services.

“Since child abuse is a community problem, community support is crucial. We are grateful for all those who took time to walk or run in today’s race. We must work together to stamp out child abuse,” said Humenansky.

Formed in October 2012 under the umbrella of The Safe Children Foundation, SafeSpot CAC will be a one-stop center where the needs of the child are first and all the Fairfax County services for child abuse victims are under one roof. 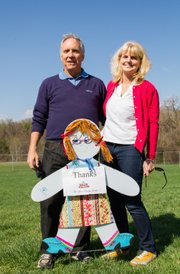 Kim Spear of The Spear Realty Group and her husband pose with the SafeSpot sponsor sign. The couple lives in Great Falls.

Corporate sponsor teams racing for the cause included ASG Security and e+, Farhoumand Dental of Reston, Colliers International, Cochran & Owen, and The Spear Realty Group, among others. News reporter Whitney Wild of ABC7 was grand marshal for the race. To learn more about the county's up-and-coming child abuse victims center go to www.safespotfairfax.org.