Massive Resistance from an Eyewitness
Votes

Massive Resistance from an Eyewitness

"So I had to learn that — how not to get caught in a place by yourself where nobody sees what's happening to you."

The Rev. James M. Kilby shows a photograph to the 4th grade students at Campbell Elementary School depicting the scene outside the courthouse in the Harrisonburg Federal Courtyard where Oliver W. Hill, NAACP lawyer from Richmond who was arguing the case, talks to his clients about the ongoing hearings to integrate Warren County High School. Kilby was there along with his father and mother and brother and sister. 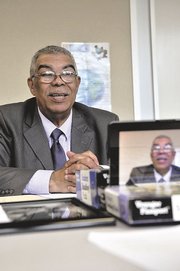 Responding to a question from a Campbell Elementary School student about what he wants to do next, the Rev. James M. Kilby said he wants to write another book and someday meet and shake hands with President Barack Obama. 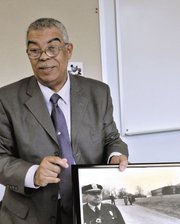 The Rev. James M. Kilby shows the students at Campbell Elementary School a photo taken when he and his brother and sister and 19 other black students entered Warren County High School on Feb. 18, 1959.

As the students assembled in a conference room at Campbell Elementary School, it was clear that the Rev. James M. Kilby had his work cut out for him. How would a 71-year-old civil rights pioneer explain massive resistance to this diverse crowd of students — a group that included not only whites and blacks but also Hispanics and Indians?

As it turns out, the raw drama of the late 1950s didn't need much help.

"Every day, it was a challenge," Kilby told the students. "It was scary because the white students would taunt us, and spit on us and try to engage you in a fight."

Take the first time he visited the boys room at the newly integrated Warren County High School in Front Royal. He was confronted by four white boys who hurled racial invectives and threatened the teenage African American. So he rounded up his brother and another African-American student and staged a massive resistance of his own. Then, only after bringing his own posse of supporters, could he conduct business in the restroom.

"So I had to learn that," said Kilby, "how not to get caught in a place by yourself where nobody sees what's happening to you."

KILBY'S VISIT to Arlington was part of what the county school system calls "expedition" learning. Campbell Elementary School is part of a national network of schools that have adopted an "expeditionary learning" instructional model, which is designed to challenge students to think critically and take active roles in their classrooms and communities. When Kilby visited last week, two teams of students took turns interviewing the 71-year-old civil rights pioneer.

"The fact that they got to visit with someone in person who lived it rather than read it through textbooks makes it so much more real to them," said Shirley Atkins, an expeditionary learning teacher at Campbell Elementary School. "I think that in the long run it helps them appreciate what they've got, and we're hoping that it will help them realize how you act and what you do and what you say can make an impact on other people."

Although the civil rights movement was within living memory for adults, it's a distant historic period for today's elementary school set. Campbell Elementary School is part of a diverse school system where more than a quarter of students are non-white. As Kilby spoke to the children, a poster advertised translation services in six languages. But back in 1958, the federal courts ordered public schools in Warren County, Arlington County, Charlottesville and Norfolk to integrate. Angry whites stood outside the school taunting the blacks with signs bearing racial slurs.

"Back in those days, you know, they were really cruel and hostile," said Kilby. "But we had to ignore them."

THE SHOCKING DETAILS of segregated schools clearly made an impression on the students, who repeatedly reacted with surprise that grown adults could behave with such malice. One girl was particularly shocked that some whites eager for revenge put rubber bands around the ankles of the family's cows, causing their legs to rot. When she learned that the family dog had also been poisoned, the story of desegregation became personal for the students.

"If they killed my dog," the girl said, "I would kill them."

Kilby also said some whites were supportive of the cause. One he mentioned by name was Virgil Seal — a fellow student at the newly integrated Warren County High School in 1959. Kilby said Seal wore his hair like Elvis, making him popular with the young women. One day Seal approached a group of black students and said he disagreed with the demonstrators who were standing outside the school.

"The way they are treating you is not right," Kilby recalls Seal telling him. "But I can be your friend."

"And so he became one of our white friends because he wasn't afraid of being called a nigger lover," said Kilby. "That was one guy that I will remember for the rest of my life."