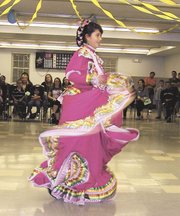 Jazmin Rocha did a dance from Jalisco, Mexico, with Arnoldo Borja (not pictured) during last year’s fiesta.

Hosted by the Centreville Immigration Forum (CIF) and the Centreville Labor Resource Center (CLRC), the event is a fundraiser for both entities. The festivities will be in the church gym and are free and open to the public.

“It’s a great event,” said CLRC Director Roberto Fernandez. “It originated with the workers, themselves, to showcase their cultural heritage for the Centreville residents. It’s also a way of them interacting with the community and bringing different cultures together in one place to celebrate diversity.”

Most of Centreville’s day-labor community comes from Ixil, a small area of northwestern Guatemala. During the first fiesta, the workers and their families shared their talents with the local residents. Last year, though, other groups joined them to share their music and dances, as well.

Also performing will be Guatemalan traditional dancers from Ixil (workers from the CLRC); the Indian Culture Club from Thomas Jefferson High School; Benito Chavez, a Guatemalan singer; Arnoldo Borja and Friends; Mexican traditional dancing; and the senior singers from the Korean Central Presbyterian Church, folk music. The deejay for the evening will be Myra Flemister.

There’ll also be a silent auction organized by the ADK Sorority and volunteers. Items up for bid will include: A week at Cowan’s Gap State Park, lunch with state Sen. Dave Marsden (D-37), a golf outing at Laurel Hill Golf Course with Supervisor Michael R. Frey (R-Sully) and chamber music performers for an event.

Several gift baskets will also be in the silent auction; themes will include tea time, Pampered Chef, children’s games, Trader Joe’s gourmet, “Pamper Yourself” cosmetics, and country with pottery and Yankee Candle.

Central American food, such as tamales, will be available during the evening, as will other refreshments such as hot dogs, chips and soda. For more information, go to www.centrevillefiesta.org.