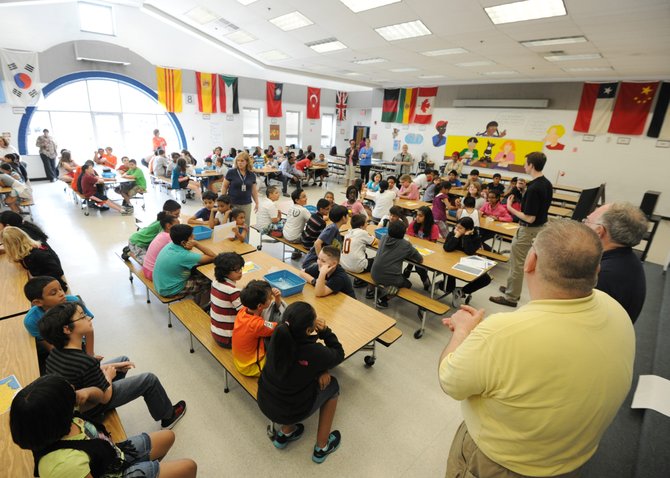 Geospatial analysts Ty Marr and Steve Bricker, members of National Geospatial-Intelligence Agency’s (NGA) 2010 oil spill response team, along with Patrick Henry College student and NGA intern Evan Johnson, speaking with fifth-grade students about the incident and the effort that went into limiting its effects on the environment. Photo contributed

Disaster response subject matter experts from the National Geospatial-Intelligence Agency (NGA), spoke to 100 students at Saratoga Elementary School in Springfield on Wednesday, April 17, about how NGA assisted the U.S. Coast Guard in the cleanup of the Deepwater Horizon oil spill, which dumped more than 200 million gallons of oil into the Gulf of Mexico in 2010.

The assembly at the school took place in recognition of Earth Day 2013.

Geospatial analysts Ty Marr and Steve Bricker, members of NGA’s 2010 oil spill response team, along with Patrick Henry College student and NGA intern Evan Johnson, taught fifth-grade students about the incident and the effort that went into limiting its effects on the environment. Students participated in an interactive demonstration, during which they created their own small-scale oil spill and used various types of containment mechanisms to simulate booms and detergent dispersants.

The fifth graders learned where the Gulf of Mexico is on a map, viewed aerial photos of the oil spill and the containment methods used in the gulf, and learned about how each containment method is used. They also had the chance to ask questions about oil spills and their impact on the environment.

Deepwater Horizon is cited as the largest accidental marine oil spill in the history of the petroleum industry. Third on the list of largest oil spills is the 1969 oil spill that occurred in Santa Barbara, Calif. After the assembly, Saratoga Elementary School Principal Pat Conklin recalled swimming off the coast of California during that time. While in the water, she could not see the surface oil, however, once on shore she recalls being covered in patches of oil, known as tarballs.