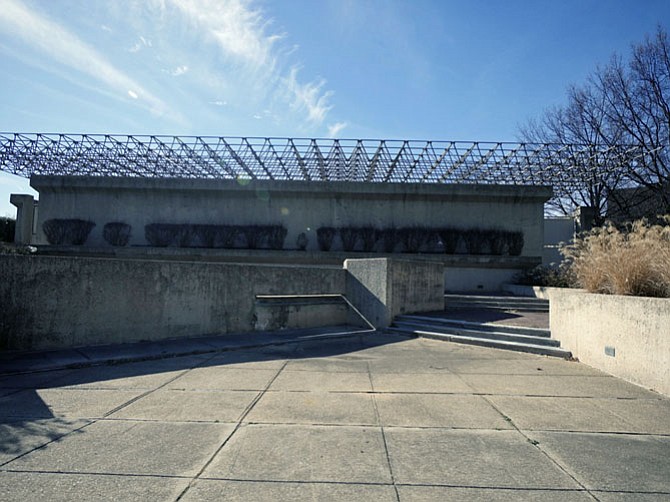 Dominion Power transformer station at 18th and South Fern Street in Arlington was responsible for a January 24 spillage of about 13,500 gallons of mineral oil used to cool the equipment. This resulted in an oil sheen found on the Potomac, Roaches Run and manholes nearby. Photo by Shirley Ruhe/The Connection

The unraveling of the oil sheen mystery on the Potomac River took Federal, state and Arlington County officials, the Coast Guard, multiple lab tests and days of speculation. And although Dominion Virginia Power has accepted responsibility, they still don't know how it happened.

The Coast Guard was notified Feb. 3 by the National Response Center about an oily sheen of unknown origin or extent on the Potomac River. Lt. David Ruhlig, incident commander for the initial response phase of the operation, said the Coast Guard got a cluster of reports in early February from the National Response Center. He said some reports were from their own Coast Guard boats on the river, others anonymous and some attributed.

"We investigate every oil spill report we receive; my specific division alone had over 300 reports last year," he said.

This was 11 days after Dominion Power had informed environmental officials about a leak that had taken place on Jan. 24 when a Dominion transformer failed and the mineral oil used to cool the equipment spilled on the ground and some of the other equipment. It wasn’t until Feb. 4 that the public got word of the situation in a news report.

"When the spill happened we notified the Environmental Protection Agency (EPA), the Virginia Department of Environmental Quality (DEQ) and Arlington County later that same day,” said Le-Ha Anderson, spokesperson for Dominion Power. “At the suggestion of the EPA, Dominion notified the National Response Center on Jan. 25. Then we were out there every day under close supervision with representatives of the EPA, DEQ and Arlington County while we were doing cleanup and inspecting locations where oil could have gone into any waterway. There was no evidence of any oil outside the area except one manhole in front of the station. We inspected the two outfalls that connect to that manhole and they were clear of any visible sign of oil. We believe we have picked up most of the oil." She said they were still in that clean-up process when the National Park Service told them there was an oil sheen present on the Potomac.

Del. Mark Levine said he first found out about the oil sheen on Wednesday afternoon Feb. 3 when he received emails from constituents saying there appeared to be oil on the Potomac.

Gulls and ducks had returned to Roaches Run Wildlife Sanctuary on Sunday, Feb. 14. This is the site where an oil sheen was first discovered earlier in February.

“They could see it, smell it. They asked if I knew anything about it so I started calling around,” he said. The Virginia DEQ confirmed there was something. The Virginia Department of Emergency Management knew nothing about it but said they would get tests to him by the next day. “As soon as I knew, I told the public within hours.” he said. “I don’t know why DEQ didn’t tell anybody. I thought the public had a right to know.” Levine represents the citizens of Alexandria, Arlington and Fairfax in Virginia’s 45th district.

"These results are not like a DNA test; these tests give us a margin that the type of oil could fall in," Anderson said.

Petty Officer David Marin, spokesperson for the Coast Guard, said that mineral oil is not the same kind of fuel oil like jet oil or gasoline but is more in the spectrum with heating oil. “Lab results from the Unified Command for all of the samples from Roaches Run, the Potomac, sewer system or manholes were the same,” he added.

Anderson explained after they had read the Coast Guard report, and done some of their own analysis, Dominion Power took responsibility. But, she said, "We don't know what could have caused this to happen. We don't have any evidence from the Coast Guard that it is a match to the sheen and how it got into Roaches Run."

David Botkins, director of media relations and communication for Dominion Power, said, “I think we’ll know eventually what caused it. We always go back and do our own forensics investigation.”

The connection of the transformer spill to the oil sheen might seem obvious, but Ruhlig said, "In the early stages we don't presume anything. We look where the facts take us. It was a dynamic event with a significant snow melt that made things more complicated, and we got a series of different reports."

Levine says the same thing happened a month ago in Harrisburg, and five years ago there was a Pepco oil spill. As a result, he plans to introduce legislation in the next session to regulate containment of mineral oil in transformers and also to require a public notification process. “Obviously there isn’t one now,” he said.

Anderson says a meeting is scheduled this week to talk about the next steps financially, the mitigation required and the period of time. "We are committed to do this quickly,” Anderson said.

On Feb. 15 legislation was considered in the Virginia legislature to expand the reporting requirements for discharge of deleterious substance into state waters. HB977 was introduced by Democratic Del. Alfonso Lopez and reported from committee. This bill was considered on the floor of the Virginia House the same day. It expanded current law to require any person who unlawfully discharges any deleterious substance into state waters to notify the State Water Control Board, the Department of Environmental Quality, or the coordinator of emergency services of the affected locality with 12 hours. Current law allows such a person 24 hours to give notice. The bill also requires that written notice follow to the board, in addition to the department, and specifies that the required report of potentially detrimental discharges by the board or the department to local newspapers, television stations, and radio stations be provided to such media outlets as soon as practicable after receiving it. This bill was defeated on a party line vote 37-56.

Lopez said he introduced his legislation last summer because Virginia is the fifth worst state in the country for toxic dumps. “It was just a coincidence that it was considered yesterday after the information became public about the recent oil spill on the Potomac.” He said the legislation would have taken Virginia from the 1890s to the 1950s in terms of notification because it expanded the requirement from newspapers to radio and TV. “And they didn’t even want that.”