Titans shut out by struggling Annandale. 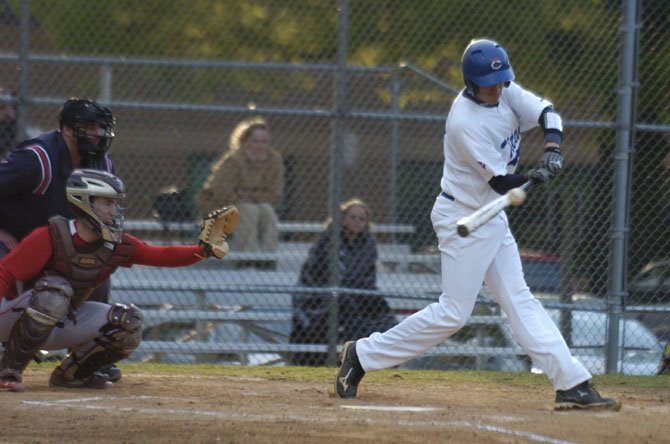 T.C. Williams senior Alec Grosser finished 2-for-3 with a double against Annandale on Monday. Photo by Craig Sterbutzel. 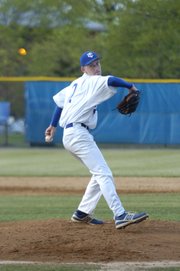 T.C. Williams sophomore Brandon Beck started on the mound against Annandale on Monday.

Alexandria — The T.C. Williams baseball team climbed to the top of the Patriot District standings with a 5-3 victory against defending state champion Lake Braddock on April 17. After losing to South County the following day, the Titans received a lesson from Annandale on Monday.

The Titans, a team strong enough to beat Lake Braddock and start district play 5-1, lost 8-0 to Annandale, a team that entered the contest with a 2-10 record, including a 0-7 mark in district play. The Atoms took a 2-0 lead in the third inning and blew the game open with six runs in the fifth.

Did the Titans overlook the Atoms?

“I don’t think we overlooked these guys,” senior third baseman Alec Grosser said. “We made three errors, they had a pretty good pitcher on the mound and we didn’t hit when he was in and just got behind.”

TC’s 1-2-3 hitters each looked at a called third strike in the bottom of the first inning.

“[Schwartz] challenged our guys to swing the bat and unfortunately we were much too passive against him,” Blair said. “We got behind in the count offensively and it’s tough to have a good night when you’re constantly hitting from behind in the count.”

The Annandale loss came four days after the Titans lost to South County, 10-8.

Blair said the Titans are learning how to deal with success. This season, TC has beaten perennial powers Lake Braddock, South County and West Springfield.

“It’s been a combination of a year-long process,” Blair said about the Titans' success. “The kids have been working hard all year long.”

TC bounced back on Tuesday with a 3-0 victory against West Springfield, improving the Titans’ record to 9-6 overall and 6-3 in the Patriot District.

TC will travel to face West Potomac at 6:30 p.m. on Friday, April 26 and will host Woodson on Tuesday, April 30. The Titans are looking for their first trip to the Northern Region tournament since 2009.