Guarding Against Identity Theft and Fraud

Police advise residents how to protect themselves. 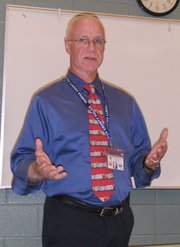 Centreville — With identity theft and fraud being such a major concern these days, police Investigator Tom Polhemus and Det. Mike Deane recently presented some ways local residents can protect themselves from becoming victims.

They’re both with the Sully District Station’s Financial Crimes Section and spoke during a meeting of the station’s Citizens Advisory Committee. Basically, said Polhemus, “If you know how people are being ripped off, you’ll know how to protect yourself.”

He told residents to watch their bank accounts online and carefully examine their statements each month. If something’s amiss, he said, “After 60 days, you own it.”

The mail also holds hidden dangers, said Polhemus. “When you get a pre-approved credit application in the mail, thieves will take it from your mailbox, get the credit card and run up the bill in your name,” he warned.

But, he said, “There’s an opt-out number on the application, and you can call it from your home phone. Just follow the prompts and that’ll tell the three credit bureaus — Esperian, Trans Union and Equifax — that you don’t want this mail anymore.”

Polhemus said consumers should go to www.annualcreditreport.com, or call this entity, to check on their credit report for any possible discrepancies or charges that shouldn’t be there. “Do it once a year; it’s free,” he said.

“If you find there’s a delinquent account with something you didn’t sign up for, contact the creditor and fill out a police report and an affidavit of fraud,” said Polhemus. “Have it removed from your credit report and stay on top of it. We see a lot of credit-card fraud and stolen credit cards. They’re taken especially from women in crowded restaurants or at fitness centers and health clubs.”

He said thieves also know that many people leave their wallets and purses in their cars, instead of in lockers, at their gym. So he told residents to keep their valuables with them, instead.

“Some thieves will even steal a person’s keys from their gym locker and then use them to open their car and steal their credit cards,” added Deane. 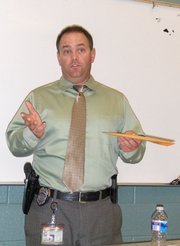 Senior citizens are also preyed upon, said Polhemus. “People will take a credit card from their purses while they’re distracted,” he said. But those wanting to commit credit-card fraud and identity theft target people of all ages.

For example, said Polhemus, “A temp at your dentist’s office has access to your credit-card information and address. She can order a $4,000 computer online, have it sent to your address and track its shipping online. Then she’ll call UPS and tell them to hold it for pickup, instead. Or she’ll change the shipping address to another state.”

He said police also handle a great deal of cases involving counterfeit credit cards. “The most important thing to a criminal is the magnetic stripe on the back of your card,” said Polhemus. “He can swipe it through a device to record it — and now he has your credit card. And there’s no skill involved; it’s really easy to do. At different times, various point-of-service computer terminals in stores and restaurants are compromised, as well.”

Noting that crimes such as these are “now driven by organized crime, such as the Russian Mob and the Romanians,” he said they’ll “put a device on top of a particular ATM. So when you put in your credit card, it’ll skim your magnetic stripe and have a camera photograph your pin number as you punch it into the pin pad.”

Furthermore, said Deane, “Now they can harvest your credit-card information remotely. If they want it, they’ll get it, so monitor your bank statements.”

“And if you do and you contact your bank and notify them about any charges that aren’t yours, you will get your money back,” added Polhemus.

He also advised the audience about check fraud, saying that there’s no difference between the way a real and a counterfeit check look. What’s important, he said, are the routing and account numbers on the bottom of the check.

“When you pay your mortgage and put the envelope in the mailbox with the ‘steal-me’ flag up, a thief will take your check and counterfeit 10 checks,” said Polhemus. “He’ll then deposit these checks and get the cash back from your bank at several, different locations. So don’t mail your checks from home; do it from work or at the post office.”

However, he added, “If your identity’s been stolen, you can get an identity-theft passport from the attorney general’s office to show the police, if necessary.”

Polhemus also warned residents to never wire money to strangers online. “Your nephew isn’t in trouble overseas,” he said. “And the power company isn’t going to call and threaten to turn off your power in an hour if you don’t wire money immediately — 100 percent, it’s a fraud.”

Regarding fraud against the elderly, he said people age 70 and over need to obtain a credit freeze. “They’d pay $10 to each of the three, credit bureaus to prevent anyone else from having access to their credit accounts. That way, no new credit would be issued.”

It’s necessary, said Polhemus, because some unscrupulous home health-care providers will, otherwise, come into elderly people’s homes, take their credit cards and run them up. “It’s sad; we see senior citizens get ripped off all the time,” he said. “But family members can monitor their accounts online for them.”

At the end of his presentation, a resident asked how police decide which financial crimes to investigate. “Our loose criteria for investigating a case are: Is a Fairfax County resident out money, and do we have a likelihood of prosecution?” answered Polhemus. “It also helps if there’s a good video or surveillance photo of the thief.”