The Post has two upcoming gigs in Vienna and Alexandria. 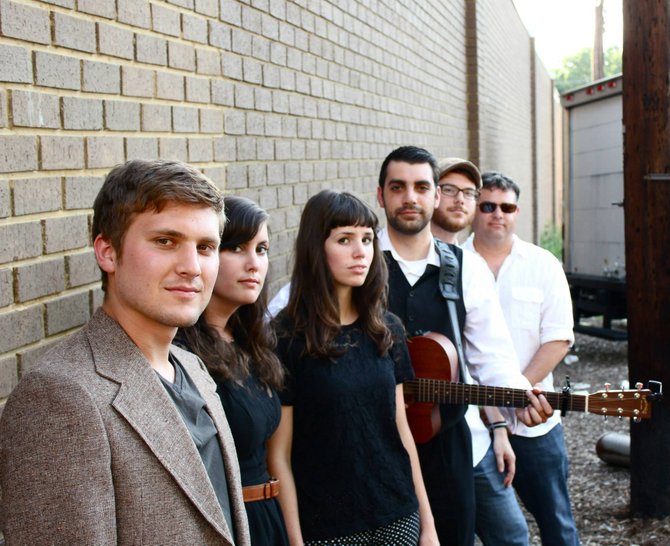 Don’t let the minor chords fool you: The Post is made up of happy people.

The band, originally started by guitarist Kate Jarosik and singer/pianist Chelsea Bryan during their time at the University of Virginia, took a brief hiatus after graduation but has started up again with some new musicians in Northern Virginia. Fresh off a successful stint through a Battle of the Bands at Jammin’ Java in Vienna, The Post is getting ready for a show there next Wednesday, Aug. 28 and another at St. Elmo’s in Alexandria Sept. 20.

Bryan writes most of the lyrics but relies on her husband, Alex Bryan, and Jarosik, and their “excellent ears” to help hone songs, she said.

Alex Bryan swears his wife is a “happy, cheerful person,” despite her love of using minor chords.

Guitarist Stephen Pierce agreed that the music is “a little angsty” and “a different style from what I listen to, [but] it’s the same feeling I like to evoke.”

The songs Chelsea Bryan writes aren’t exactly autobiographical. Instead, she takes something she’s felt or otherwise experienced and will use that as inspiration.

The minor chords just tend to come out, she said. Music written in those melancholic keys “is beautiful and haunting.” That her songs tend to be reflective and in moody melodies is coincidence. 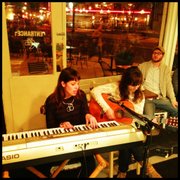 Chelsea Bryan and Kate Jarosik of The Post playing at Northside Social's open mic on Arlington on a Sunday night in spring 2012. Billy Boyce, their bassist, is pictured right.

Jarosik said the band started when she and Chelsea Bryan found out they were both musicians.

“How we lived together and didn’t know, I don’t know,” she laughed. “I didn’t realize she sang and she didn’t realize I played instruments.” In addition to guitar, Jarosik plays piano and mandolin and sings backup vocals.

In truth, she’d prefer to play the piano, but she’s happy to let Chelsea Bryan take the lead on that for many of their songs.

The band is rounded out by Billy Boyce on bass, Dennis Stockart on drums and, on occasion, Alex Bryan on saxophone.

He hadn’t played since middle school, Alex Bryan admitted, and The Post “isn’t trying to be the next Bruce Springsteen or anything like that,” but there are “about three or four songs that have saxophone parts.”

His role is more “embellishment” and roadie-slash-sounding board than active musician, and that suits him just fine. “I’m happy to help,” he said.

While Alex Bryan kind of married into his role in The Post, Pierce said he got involved through Jarosik and her boyfriend, a former roommate of his.

Playing music is “something I do for myself,” he said, adding that he’s been playing for 16 or 17 years. As proof, he’ll be taking his guitar with him on an upcoming trip to China and Tibet “so I can play in the mountains.”

Stockart met the Bryans through their church and was convinced to help, he said.

A drummer for 30 years, Stockart said the band’s rehearsal schedule is “pretty relaxed,” something that might be due to the busy schedules of the band’s members.

“I played in college, but this felt like the right thing to do,” he said of joining The Post. “I love to listen to lots of different kinds of music, but my style is not a particular style. I feel a song and play it.”

Similarly, Boyce is a pastor at the Bryan’s church who particularly enjoyed participating in the Battle of the Bands earlier this summer.

“It was really great to meet other local musicians and hear their music,” he said. “Northern Virginia has a vibrant local music scene, so it was fun to hear a diversity of talent and style.”