'Mistake' comes on the heels of 'communication issue.' 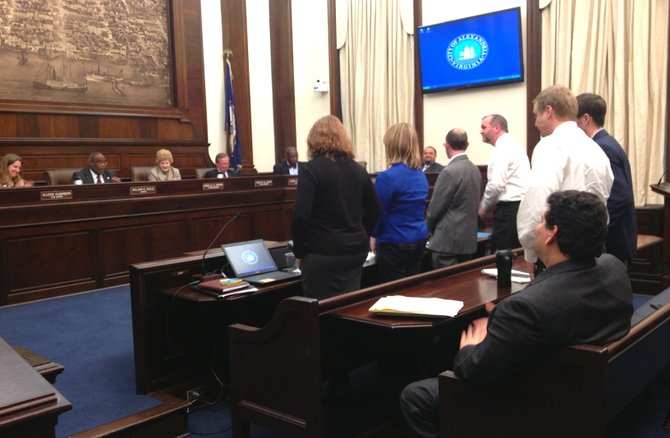 Budget officials stand to be recognized after City Council members voted to approve the budget for fiscal year 2014 back in May. Council members would later learn it ended a set aside for affordable housing that a majority of the members did not approve, and one change they did approve for increasing the utility tax rate has yet to be implemented. Photo by Michael Lee Pope.

Shortly after City Council members approved the budget for fiscal year 2014, they had to reconsider two dedicated sources of revenue that had been spiked despite a lack of consensus among elected officials. Now City Manager Rashad Young has acknowledged a new blunder in revenue collections, a failure to follow all the necessary steps to increase utility taxes. Speaking to reporters this week, Young called the former a "communication issue" and the latter a "mistake."

"We try not to make mistakes," said Young. "It just was an oversight at an extremely busy time for us when we are trying to wrap up the legislative session."

Councilman Justin Wilson flagged the issue last weekend. He was at home on a Saturday night reading his utility bill when he realized that the rate did not reflect the new higher amount approved by elected officials. He sent an email to city leaders, who began an investigation to get to the bottom of what happened and why. As it turns out, the increased tax was never put on the docket for a final vote — leaving City Hall in the red by about a quarter of a million dollars.

ON THE ISSUE of dedicated revenues, City Council members were forced to place the docket on the item for a second time to reconsider the issue. During a rare after-the-fact public hearing on the budget, Mayor Bill Euille said that the decision to end a set-aside tax for affordable housing happened "accidentally." Council members ended up voting to restore the set-aside fund for affordable housing.

"Adding something after the final add-delete meeting is unheard of and does not bode well for our open, democratic process," said Vice Mayor Allison Silberberg at the time. "It undermines it."

"I wouldn't describe it as a mistake," said Young. "I think we already discussed the set-aside issue back in June, and what we are talking about now is the utility tax."

YOUNG BLAMED the newest budget problem on a scheduling error. City officials have recently installed software known as "Legistar," which allows them to put items on the docket for City Council meetings. The problem with the increase to the utility tax was that it was never placed on the docket for a second reading, which means that it never became active. When asked how that could have happened, Young explained that the item was never typed into Legistar.

"It failed to occur amongst all of the revenues and appropriation ordinances that are required to be enacted and adopted," said Young. "This is one that just slipped through the cracks, quite frankly."

No heads will roll, Young said, and nobody will be reassigned to a different job. Instead, city officials are going to docket the item for September. That means monthly utility bills will increase 60 cents to $3 for gas and electric services. In the future, Young said city officials will revisit their process for docket management and focus attention on responsibilities of the budget officials. They will also explore legal options for combining tax and fee changes into one or two documents rather than setting them all up as separate votes.

"When we were going through that process this year, I suggested that we should throw them all into the same ordinance," said Wilson. "It's better for the public, and it's more transparent."