A Fading Craft Thrives in Vienna 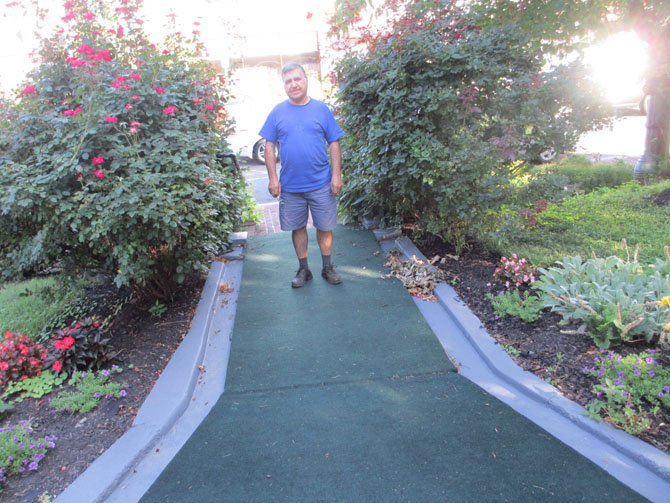 The grounds of Guarantee Shoe Repair are an oasis on busy Church Street. Owner Manuel Fesdekijan has created gardens, a little fish pond, a fountain and a gazebo for lunching. Photo by Donna Manz.

The cream-colored clapboard building that houses Guarantee Shoe Repair was the original Money and King funeral home, built 110 years ago.

The cream-colored two-story clapboard house at 131 Church St. N.W. could be mostly any one’s home in Vienna. It’s well cared-for with rose bushes and an array of flowers and greenery out front. To the side is a small fish pond and to the back is a gazebo anchored by a fountain. The gazebo’s flooring covers an obsolete well whose pump remains a visual magnet.

“It’s not one single story about Manuel … it’s everything he does. He’s always friendly, helpful and caring. I’ve used Guarantee Shoe Repair for decades and Manuel is the sweetest guy.” —Myra Gillum, Vienna

But this is not just any home in Vienna; in fact, it’s not a home at all. Rather, it houses Guarantee Shoe Repair, a Vienna business preserving the 110-year-old building. Owner Manuel Fesdekijan, an Armenian who emigrated from Lebanon in 1971, bought his first shoe repair shop in Vienna in 1980. The original Guarantee Shoe Repair was just a few doors down from his current location, the original Money and King funeral home, which he bought in 1990. The land the house and the outbuilding sit on is a developer’s dream but Fesdekijan says he’s “not ready to sell.” He’d better not. His customers depend on his presence in Vienna.

“I have good customers,” Fesdekijan said. “Come-back customer, some third generation, and every day new customers.

Under a canopy, Manuel Fesdekijan keeps the pump from an olden well-pump, a babbling fountain and a picnic table. He will serve Armenian coffee there to people who drop by when he’s lunching.

VIENNA RESIDENT Myra Gillum echoed Fesdekijan’s description of his personality and character. “It’s not one single story about Manuel,” Gillum said. “It’s everything he does. He’s always friendly, helpful and caring. I’ve used Guarantee Shoe Repair for decades and Manuel is the sweetest guy.

“When he was closed once, I went to another place. He was nothing like Manuel. [That man] never smiled, wasn’t polite. I went back to Manuel.” 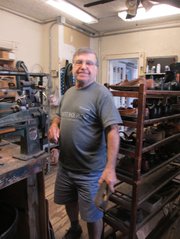 Manuel Fesdekijan, longtime owner of Guarantee Shoe Repair, always has a smile for a customer, even when he is working on his backroom equipment.

Really, Manuel never fails to smile when a customer walks into his shop. Although he has a helper, Manuel will raise his head while at his equipment to smile and say hello when he sees a customer. He has been known to serve Armenian coffee to customers who come around the back fountain.

“My customers are confident when they come in here. I am always nice with them and they’re always nice with me. We talk about their families, how they’re doing. If they’re sick, I pray for them.”

Fesdekijan shared many of things about Vienna and his shop that go hand-in-hand. People in Vienna, he said, appreciate the gardens and pond on his business grounds. It’s a serene outpost on busy Church Street. The little fish pond, he said, attracts youngsters who “fish” in it. Out back, at the table beneath the gazebo, customers stop to chat when Manuel is lunching there. The babble of the fountain is a natural melody. “When my friends come, we sit, we eat. Customers come and sit with us. I serve them coffee.”

Behind the shoe repair shop is the kitchen where an older electric stove remains. Except for the stove, Fesdekijan updated the kitchen. The doorway looks on Manuel’s equipment room. The original flooring, 110 years old, remains. Fesdekijan enjoys telling the history of the building, pointing out that the outbuilding once housed horses used for Money and King’s funeral processions. It’s prime land, 20,000 square feet in the heart of the Church Street historic district. Not a month goes by that a developer does not approach Fesdekijan about selling. “They say, you can have a new shop. Why do I want a new shop?” There’s lots of “action” on Church Street, always people walking by, said Fesdekijan. He shows off his buildings and grounds just like any homeowner would. And he notes the changes on Church Street, all the new development and businesses.

Fesdekijan rents out offices in his building but it is he who takes charge of the grounds, beautifying them for the community to enjoy.

WHEN THOMAS HUGHES entered the United States Military Academy as a new cadet in 1976, he bought a new pair of military-style shoes to try to make a good impression. He wore those shoes for four years of military school and graduated in the same shoes. Three days later, he married while wearing those same shoes. Hughes said he wore the shoes through all his military duties as part of his dress uniform, and when he left the military, he wore those shoes for formal functions.

After many years of use, the soles were worn completely through, and, he brought them to Manuel at Guarantee Shoe Repair. Fesdekijan remarked that they were well-made, sturdy shoes and he would be able to repair the soles and heels, Hughes recalled.

“The result was a pair of shoes as good as the day that I bought them, 37 years ago,” said Hughes. “In addition to those special shoes, Manuel has repaired a pair of cowboy boots, re-heeled several other pairs of my wife's and my shoes. The result is always ‘as new.’

“Manuel is a great asset to the Vienna Community.”

Fesdekijan and his wife live in Annandale and they’ve raised two children in Northern Virginia. When he came to America, he spoke no English. Today, he is a business and landowner loved by the community he serves.

He takes pride in his work but worries that once he is gone, nobody will step up to take his place. Nobody, he said, wants to learn his job. It’s hard work and the new generation sits in front of computers. His customers expect him to always be here. “I say, what happens if I die? They say, ‘don’t die.’”

Sometimes, when Fesdekijan takes off a couple of days or a week, he’ll come back to customers “very upset” because they think he left, closed. “They’ve told me, ‘you cannot go anywhere, we need you in Vienna.’

“Of course, I need them, and they need me. We are like family.”