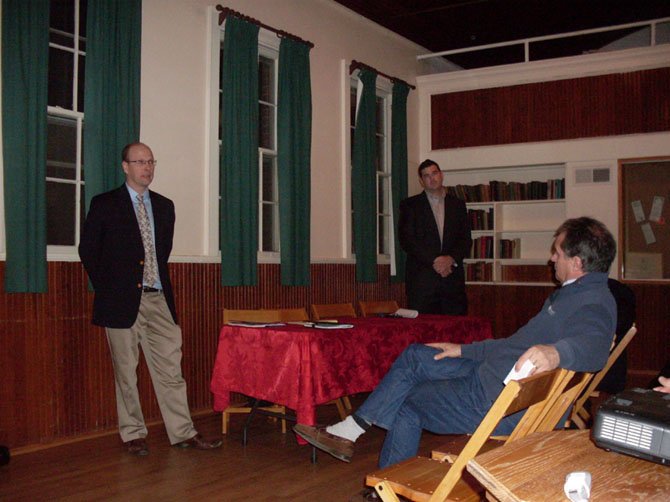 By Russ and Pete Ugone

The Great Falls Citizens Association (GFCA) hosted two meetings on Dec. 17, to update Great Falls residents on the plan to clean up contamination from a spill of Methyl Tertiary Butyl Ether (MTBE) that had occurred at the Exxon gas station that was located at 9901 Georgetown Pike. In 2009, Exxon Mobil reported the contamination from the spill to the Virginia Department of Environmental Quality (DEQ). As a result, DEQ opened a Pollution Complaint case and required the new owners of the property, Fairfax Petroleum Realty, to develop a Corrective Action Plan. MTBE was an additive used in gasoline to boost oxygenation, thereby reducing emissions from vehicles, as required by the Federal Clean Air Act. MTBE, was used between 1995 and 2005, and was later replaced by ethanol. MTBE is soluble and is slow to degrade. Amy Stephan, a GFCA representative said "residents are concerned that the MTBE will contaminate local wells." Several other Great Falls homeowner associations were also represented at the meeting.

THE FIRST MEETING was a briefing on the elements of the draft Corrective Action Plan to address the cleanup of the MTBE underground plume that extends almost a quarter of a mile to the southeast. Mike Steele and Jeffrey Hale, from the firm Kleinfelder, provided an overview of the plan and key milestones. The second meeting was a Notice and Comment advisory held by the DEQ to hear additional comments and recommendations from the community on the draft Corrective Action Plan. Cynthia Sale, Environmental Manager, DEQ, stated that the Department has managed over 37,000 petroleum spill cases since being organized. Sale commented that "Virginia has no limits on MTBE in drinking water for taste and odor as it is not as toxic as other chemicals and tends to break down," and that "if there were no wells in the area, this case would have been closed."

The draft Corrective Action Plan, submitted by Kleinfelder to the DEQ, includes three major elements: soil vapor extraction, ground water extraction, and additional testing of wells, as needed. A mini-water treatment plant will be temporarily built on the property (where the gas station had been located) to draw the water out, remove the contaminants, periodically test the water, and discharge the water into the drainage system. The vapor extraction system will be vented into the atmosphere. Based on measurements of the underground plume taken from 19 existing monitoring wells, additional wells may be added for monitoring purposes. Steele stated, "However, the area of contamination known as the plume, has not expanded since 2009, as the MTBE tends to break down." He added that "it is estimated that cleanup will take 2 to 5 years and that the monitoring wells will be in place for 5 to 7 years." The Corrective Action Plan is scheduled to begin in 2014.

DEQ held the second meeting to provide notice to the public on seeking comments to the draft plan. Sale stated that "DEQ uses a risk-based program to protect the drinking water obtained from the [private] wells in the area." She added that "not all of the MTBE may be removed if it’s not a threat to the [private] wells." Sale complimented GFCA in its efforts to work with the DEQ and Kleinfelder, and in providing comments, concerns, and recommendations.

THE ESTIMATED COST of implementing the Corrective Action Plan ranges from $600,000 to $875,000, which is the responsibility of the current owner of the property, Fairfax Petroleum Reality. The owner may request reimbursement of expenses up to $1 million from a contingency fund managed by the DEQ. The fund is provided through fees collected from petroleum distributors operating in Virginia based on a percentage of sales and disbursed when needed. Sale further stated that "DEQ will determine when the process is completed, with the goal that MTBE will not enter into private wells." She added that any comments on the draft Corrective Action Plan are due to the DEQ by Dec. 27, and should be submitted to Alex Wardle DEQ (awardle@deq.virginia.gov)

After the cleanup process is completed, the property will be developed for a bank. The 70- page draft Corrective Action Plan can be viewed at http://GFCA.org or three copies are available at the Great Falls Library.