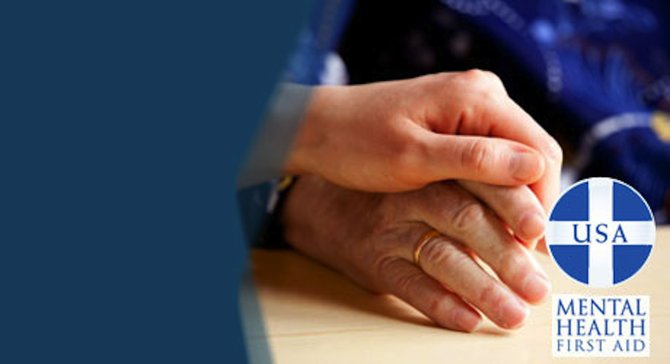 The idea of first aid dates back to Order of St. John, a medieval society of knights that offered training in how to treat common battlefield injuries. Now, the Virginia General Assembly may be bringing the idea to mental-health services in the wake of the school shooting in Connecticut. Last weekend, the House Appropriations Committee approved $1.85 million to expand training for Mental Health First Aid — arm today’s knights tools for the modern battlefield, whether it be a schoolhouse corridor or a hotel lobby.

“This is an important step forward to improve the capacity of Virginia to address mental-health issues,” said Del. Rob Krupicka (D-45), who originally introduced a budget amendment for $2.5 million. “By training teachers and other community members in Mental Health First Aid, people can better identify individuals who require help and get them the support they need.”

Mental Health First Aid is a relatively new public education program, first created in 2001 by the National Council for Community Behavioral Healthcare, the Maryland Department of Health and Mental Health and Mental Hygiene and the Missouri Department of Mental Health. Instructors explain how to identify and respond to signs of mental illness in an interactive 12-hour course. The overview of mental illness and substance-abuse disorders introduces participants to risk factors and warning signs of mental health problems.

“Being on the front lines, you don’t always know if someone has mental illness or if they are just having a bad day,” said Evelyn Quiles, an administrative assistant who works in the Alexandria JobLink office. “This training taught us to not pass judgment so quickly, which could lead to the wrong conclusions.”

CONSIDER THE SCENERIO: A woman enters a government building and begins acting strangely. She is bald and disoriented, explaining that she can’t remember where she parked. The woman behind the front desk calls Adult Protective Services, which dispatches Alexandria social worker Sue Ellen Mawhinney to the scene. If the front desk worker had been a graduate of Mental Health First Aid, Mawhinney says, he or she might have been able to handle the situation without calling in reinforcements.

“I think the sense was that this was some sort of medical crisis, when in actuality it wasn’t,” said Mawhinney. “I think this training would equip the average person to not necessarily think that this would be something beyond their scope to deal with and to give folks tools that they might not otherwise have to respond to people who are in some sort of crisis.”

The 12-hour course has been presented to primary care professionals, employers and business leaders as well as school officials and nursing home staff. Many graduates of the class have gone on to become certified instructors in Mental Health First Aid, expanding the universe of people with the skills to help diffuse situations before they escalate out of control.

“The first think you do is listen patiently,” said Alexandria caseworker Wilma Roberts. “You don’t argue. You don’t make it seem like they are a liar.

If the Senate approves the $2 million appropriation, Krupicka says, he wants to fund the training programs for school staff members across Virginia.

“People need to be aware of the complexity of mental-health issues, and they need to know how to identify them and be sensitive to the challenges that go along with them,” said Krupicka. “Having a Mental Health First Aid training program in place can really help people get the support and services they need so that we can prevent someone from going undiagnosed or unidentified.”