Fairfax Station artist Lynn Goldstein was selected to participate in the exhibition “Resistance Through Art,” which will be on view at the Jewish Community Center of Northern Virginia (JCCNV) from now until April 15. The JCCNV and the Jewish Community Relations Council of Greater Washington are sponsors of the exhibit. Goldstein states, “This was an opportunity to make a piece that invites viewers to interact with the work in ways that have not been possible with the paintings that I have made in the past.” 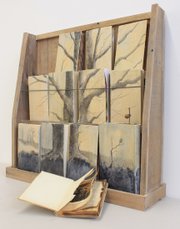 Close up view of "Treatise" by Lynn Goldstein.

Handpicked artists were asked to submit pieces in any media to the show. Goldstein will be including three pieces for this exhibition. The first, entitled “Treatise,” entices viewers to interact directly with the artwork by the use of everyday objects—books. Goldstein states, “This work is meant to move viewers out of their comfort zone to tell the story of the Holocaust in a way that inspires personal reactions. I am an avid reader, and since education has been an important tenet in Jewish history, books seemed the obvious ‘canvas’ for me to utilize. Books often hold stories of people’s lives and provide us with connections to others. Also, books are everyday objects that many of us take for granted. Therefore, these books are symbolic not only of education, but also of lives that were forever altered by the Holocaust. They are symbolic of the everyday that was taken away from 6,000,000 people.” The books are being displayed in another everyday object, a rack that could be used to display dishes. This method of display makes it easy for the public to take the books in hand to observe the imagery that is included to inspire powerful reactions in the viewers. Symbolism plays a significant part in the entire installation. 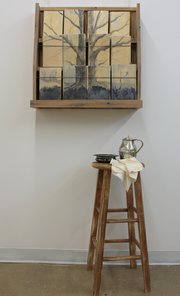 For the two other pieces included in the show, Goldstein chose two paintings that depict light coming through the forest. The paintings are entitled “Veiled in Uncertainty” and “Veiled in Promise.” Goldstein recounted a conversation that helped to inspire these paintings. “Many years ago, while in conversation with a colleague who grew up in Finland during World War II, I discovered that her father had hidden Jewish families in the forest during the Holocaust. When I expressed admiration for his bravery, she responded, ‘What else could he do?’ I never forgot this exchange. These paintings reflect the image that was seared into my consciousness because of that talk so long ago.”

More of Lynn Goldstein’s art can be viewed at her studio at Workhouse Arts Center in Lorton, Virginia. To see her work online visit: http://www.lynngoldstein.com or visit her blog at http://lynngoldsteinfineart.blogspot.com/.