‘It’s All about Our Children’
Votes

‘It’s All about Our Children’ 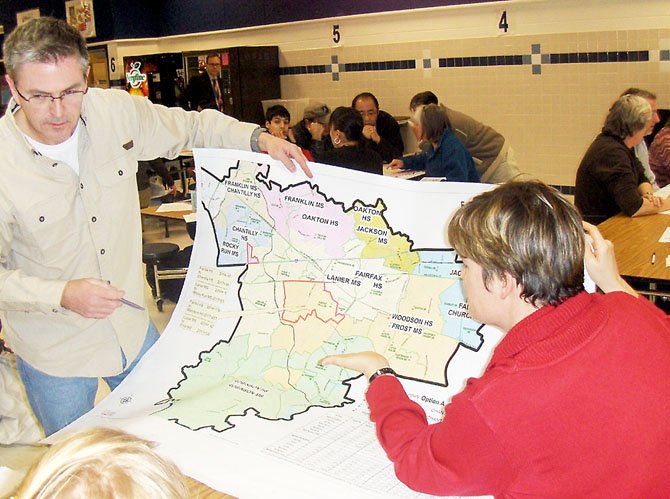 Parents Bernie Feord and Jennifer Willey examine one of the boundary-change maps. Photo by Bonnie Hobbs.

The goal of the Fairfax High/Lanier Middle School boundary study is to remove 300 students from Fairfax and 150 from Lanier and send them elsewhere to relieve overcrowding at those two schools. But how best to do it has not yet been decided.

(From left) Parents Bernie Feord, Jennifer Willey and Cleve Davis examine one of the boundary-change maps.

So more than 200 people came to Lanier’s cafeteria last Wednesday, Feb. 20, to learn more about the three boundary scenarios proposed and express their opinions about them. Centreville and Chantilly residents also attended, because the changes will affect many of their children, too.

Option A: Minimum movement of students. This plan:

High schools in the boundary study are Chantilly, Fairfax, Falls Church, Oakton and Woodson, plus Robinson and Lake Braddock Secondary. Middle schools in the mix are Franklin, Frost, Jackson, Lanier, Robinson and Rocky Run. No elementary-school boundary changes are planned. 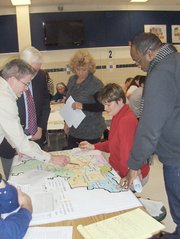 At boundary meetings held Feb. 19, 20 and 26, parents received maps showing the three proposed boundary-change scenarios involving schools with attendance areas contiguous to Fairfax High and Lanier. They also received charts listing the high schools and middle schools in the boundary study, plus information about their building capacities, current enrollments and 2014-15 and 2017-18 projections.

They then discussed each scenario in small groups at their tables and rated each one according to how well it reduced overcrowding at Fairfax and Lanier and improved the enrollment balance in the region. They also got to tell what factors influenced their decision.

“It’s all about our children,” said parent Bernie Feord at his table, Feb. 20. A Penderbrook resident and parent of a son at Fairfax High, he added, “It’s also about all of us as Fairfax County taxpayers.”

DISCUSSING OPTION A, he didn’t like the attendance “island” it created by sending students in the middle of Robinson’s attendance area to Woodson. Jennifer Willey, who lives in Fairfax Villa, was also opposed to that option, saying, “It splits Fairfax Villa Elementary. Some children from there would go to Frost and some to Lanier, which is pretty random.”

However, parent Cleve Davis said both Options A and C get rid of Greenbriar West Elementary’s split feeder system, sending all its grads to nearby Rocky Run Middle, instead of some there and some at Lanier. His daughter’s a Chantilly High freshman and his son’s a GBW sixth grader, but the Davises’ own boundary change may affect them more than the FCPS changes.

“We’re moving from Greenbriar to the Monument Drive area in Fair Lakes,” said Davis. “We were hoping our son would go to Lanier, but he’ll be in middle school for the first time, so it should be OK. We have three older kids who went to Rocky Run and loved the school, so we wanted to stick with what we know.” 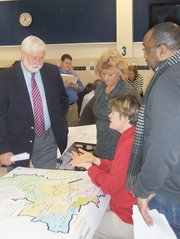 “Our daughter would go to Fairfax High according to the boundaries, but we’d love her to be able to stay in Chantilly and graduate with her friends,” he continued. “It’s tough to move a kid in high school.”

Neither Feord nor Willey liked Option C. Under this scenario, the Penderbrook and Fairfax Farms areas of the Waples Mill Elementary attendance area would shift from Lanier to Franklin Middle and from Fairfax High to Oakton High.

“So people who live next to Lanier would have to drive in rush hour to Franklin,” said Feord. “Option C exceeds the 300 [students to remove from Fairfax High], but affects a lot more families.”

Agreeing, Willey said, “Option C seems more disruptive and is just not fair. I feel like [the school system] put two oddballs, A and C, out there so we’d all choose B.”

“We all think Option B makes the most sense,” added Feord. “It keeps the Fairfax Villa kids together and gets rid of the Woodson island in the midst of Robinson. It lowers the overcrowding by moving more kids from Fairfax and Lanier and seems to affect the least amount of kids.”

Willey worried that her daughter, a Fairfax Villa sixth grader, might go to middle school at Lanier with one group of children and “potentially a whole other group in high school,” if she were later diverted from Fairfax High to Woodson. But under all three options, she’ll go from Lanier to Fairfax.

Diane Birch of Fair Lakes Glen has two daughters, one’s in eighth grade at Lanier and one’s a Fairfax High sophomore. “I just want to keep them where they are,” she said. “We always knew they were going to Fairfax High and, no matter what plan is picked—[by the time it goes into effect]—it doesn’t look like they’ll change.”

But Birch also has a son in sixth grade at St. Timothy Catholic School in Chantilly and he could be affected by a boundary change. “If he’s going to [go to] Lanier for two years and then to Fairfax, I’d be happy,” she said. “But if they said he was going to Rocky Run and then to Chantilly High, I’d keep him in St. Tim through eighth grade so he wouldn’t have to go to two middle schools [Lanier and then Rocky Run].”

Pleased with all the boundary options was Silvia Vizcarra of Fairfax’s Oak Marr community. She has a sixth grade son at Providence Elementary and an eighth grade daughter at Lanier. “None of the options affect our neighborhood, so we’re very happy,” she said. “Our children will go from Lanier to Fairfax.”

But Willey said many local schoolchildren will have to deal with more than their share of boundary changes. “Several families we know will have gone to three different schools during three years—from Lanier to Fairfax to Woodson,” she said. “So those children who are eighth graders now need an option to go directly from Lanier to Woodson.”

Gary Chevalier is the retired, former director of FCPS Facilities Planning Services, and is consulting with staff on the new boundary proposals. At last week’s meeting, he told Feord, “I don’t think this is set in stone. If you want this phased differently, tell them.”

MEANWHILE, AT ANOTHER TABLE, parents there favored Option C. Christina McDonald has a fifth grade daughter at Willow Springs Elementary, a seventh grade son at Lanier and a daughter who’s a freshman at Fairfax.

“We’re happy because all three options keep my kids at Lanier and Fairfax,” she said. “We just don’t want some last-minute option coming in and changing things. Option C gives the most relief to the schools and eliminates split feeds at Waples Mill and GBW, plus the Woodson attendance island. And from the comments at our table, people at GBW want to change to Rocky Run and Chantilly; they don’t want to drive to Fairfax.”

Ayla Wells, who has children in first, fifth and sixth grade at Willow Springs, asked Chevalier when the new high school would be built. He said there’s some money for it but, “Right now, we can’t find a [building] site.”

Wells said her primary boundary worry was that her neighborhood, Fairfax’s Brentwood Farm community, would get split up by Braddock Road or the Fairfax County Parkway. “If we had to move, we wanted our kids to move through all three schools together,” she explained. “We think Option C is best because it alleviates the most overcrowding.”

But Bill Muras of the Fairfax Villa community was uneasy. He has two daughters at Fairfax Villa Elementary and a son at Lanier. “My biggest concern is that they don’t move us now to Woodson and then to somewhere else later when a new high school is built,” he said. “And our community is so closely associated with Fairfax City that we wanted our children to stay with the geographic city kids.”

Eric Kravchick of Fairfax’s Ashton Wells community was happy, but concerned that things could change, “Because we’ve seen it happen.” He has a fifth grader at Colin Powell Elementary, a seventh grader at Lanier and a junior at Fairfax High.

“Colin Powell goes to Lanier and Fairfax, and we think our children who started in that program should finish in it,” he said. “Otherwise, they’d have to leave their friends. We thought C would be best because it made the most change and then FCPS wouldn’t have to do it again—at least, for awhile.”