And They’re off to Washington, D.C.
Votes

And They’re off to Washington, D.C. 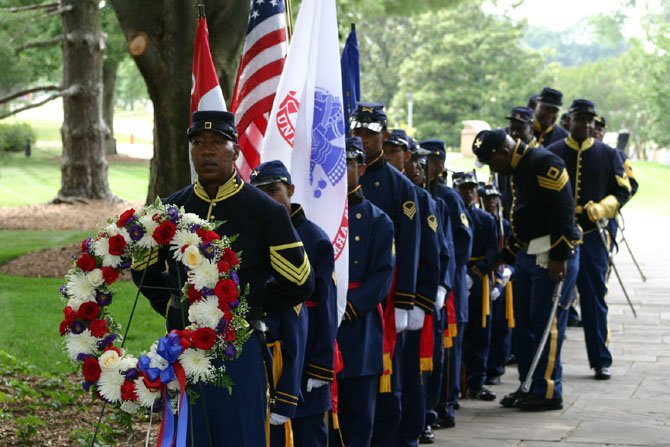 While most people will have to watch President Barack Obama’s inauguration celebration on TV, Army Sergeant Major (retired) Keith Jarman of Centreville will be there in person.

He’s president and founder of the Rough Riders Buffalo Soldiers Association of America, Northern Virginia Chapter. And that group, plus the Junior Buffalo Soldiers Drill Team of Centreville’s Mount Olive Baptist Church, will be participating in two of the formal inaugural balls.

“We submitted a proposal to President Obama’s Inauguration Committee to either participate in the inauguration parade or an inauguration ball in Washington, D.C.,” said Jarman. “We also provided a copy of our DVD, ‘Eyes Still On the Prize - Buffalo Soldiers Legacy,’ filmed in June 2011 at Arlington National Cemetery.”

To their delight, they were selected to present the legacy and spirit of the Buffalo Soldiers during the All American Heroes ball on Jan. 20 and the Global Peace ball on Jan. 21. Said Jarman: “The essence of our unique presence and dramatic reenactment performance — in our authentic, 1885 U.S. Union Army Blue Calvary uniforms — will personify excellence, pride and a tremendous honor for all the participants.”

The Junior Buffalo Soldiers Drill Team will have the honor to post the Colors. “It will march into the main ballroom during the playing of the National Anthem with the U.S. flag, Defense flag Army flag and our organization’s flag, Gideon, during the initial opening ceremony,” said Jarman. “This is an honor normally executed by a military Color Guard.”

And at both balls, the Rough Riders Buffalo Soldiers will execute a reenactment called, “A Tribute to our Military American Heroes.” Some 20 Rough Riders and 24 drill team members — boys, ages 6-17 — will take part.

“I am so humbled, honored and blessed to have this opportunity to represent the legacy of the Buffalo Soldiers and to present my organization at such high visibility and prestigious events as the American Heroes and the Global Peace inaugural ball celebrations in honor of President Obama's second term as the President of the United States of America,” said Jarman.

Each inaugural ball committee interviewed and reviewed many requests to perform at the balls, but only a few were selected. Said Jarman: “We are all extremely excited that our presence at each ball fits perfectly within the themes and expectations for each event.”

Buffalo Soldiers were all African-American units during the Civil War and helped protect and expand the American West during the late 1800s and early 1900s. “They're sometimes called America’s ‘forgotten’ military heroes,’” said Jarman. “And while their history may not be well known or included in American history books, their legacy has left a lasting imprint on this country.”

“As we remember our American heroes who died in service to our country, let us also honor the service of the Buffalo Soldiers,” he continued. “Since the birth of our nation, African American soldiers have demonstrated the core values of an American hero. For generations, these proud heroes have played an integral role in protecting and shaping this nation.”

“The essence of our unique presence and dramatic reenactment performance — in our authentic, 1885 U.S. Union Army Blue Calvary uniforms — will personify excellence, pride and a tremendous honor for all the participants.”

Initially denied the right to bear arms in the first year of the Civil War, by the end of 1862 black soldiers were fighting for the Union. Volunteer units from different states went on to serve with distinction throughout the war. Said Jarman: “President Abraham Lincoln’s decision to transform the conflict from a fight to preserve the Union to a crusade to abolish slavery transformed the history of our nation and the role of the black soldier.”

Now, he said, both of his Buffalo Soldiers groups have served their community through reenactments, plays and drills at schools, local government, military installations, and government agencies.

“Involving our youth in this experience brings a unique element to our organization that inspires hope, pride, respect and patriotism in people,” said Jarman. “Presenting the wreath at the Tomb of the Unknowns at Arlington National Cemetery and being selected to participate in two, highly visible and prestigious inaugural balls in our nation’s capital truly will be our most honorable experiences to date.” So what’s left to achieve? Replied Jarman: “The Junior Buffalo Soldiers Drill Team’s greatest desire is to be invited to the White House to meet with President Obama.” For more information on either group, go to www.rough-riders-buffalo-soldiers.com.