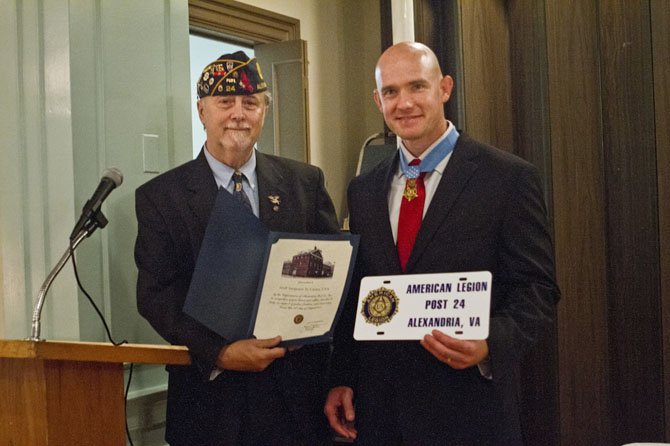 The Medal of Honor is the U.S.’s highest military honor, awarded for personal acts of valor above and beyond the call of duty. On Aug. 26, Army Staff Sgt. Ty Carter became one of only 79 living recipients of the award during a whirlwind day that began at the White House and ended at American Legion Post 24 in Alexandria.

“It’s an honor and privilege to have a Medal of Honor recipient at our Post,” said Commander Jim Glassman at a private dinner welcoming Carter, his family and members of his unit to the historic Old Town American Legion building. “We not only welcome Sgt. Carter but also his fellow soldiers whose bravery during the Battle of Kamdesh kept the outpost from being overtaken.”

Earlier in the day, President Barack Obama bestowed the Medal of Honor on Carter for his courage under fire as nearly 350 Taliban insurgents attacked Combat Outpost Keating in the Kamdesh Valley of Afghanistan in the early morning hours of Oct. 3, 2009. Out-numbered nearly 8 to 1, eight U.S. soldiers were killed in the ambush and more than 25 wounded, making it one of the deadliest battles for Americans in the Afghan war.

"It’s an honor and privilege to have a Medal of Honor recipient at our Post." — American Legion Post 24 Commander Jim Glassman 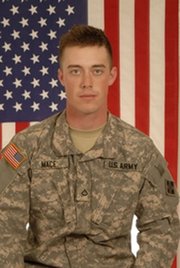 Carter is only the fifth living recipient to be awarded the Medal of Honor for exemplary heroism in Iraq or Afghanistan. He was honored for his efforts to save Spc. Stephan Mace, a 21-year-old Purcellville, Va., resident who was mortally wounded and left stranded in the attack. Because of Carter’s actions, Mace survived the battle but died later that night in surgery.

“I lost some of my hearing in that fight,” Carter said in his press remarks at the White House, “but I’ll hear the voice of Mace, and his pleas for help, for the rest of my life.”

Carter, a 33-year-old father of three, visited Old Town with his wife Shannon and several members of his unit.

“Everyone, especially Ty and Shannon, said that their evening at the American Legion was one of the best events during their time in D.C.,” said Leta Carruth, an organizer of the dinner. “By providing Ty and his soldiers and family the opportunity to be ‘out of sight’ the night after receiving the Medal of Honor earlier that day was the perfect medicine for them all.”

In recent months, Carter has spoken out for troops suffering from Post-Traumatic Stress Disorder and hopes that an understanding and compassion for those with PTSD and other war-related mental health issues will continue to grow.

“Know that a soldier suffering from post-traumatic stress is one of the most passionate, dedicated men or women you’ll ever meet,” he said. “Know that they are not damaged. They are simply burdened with living what others did not.”