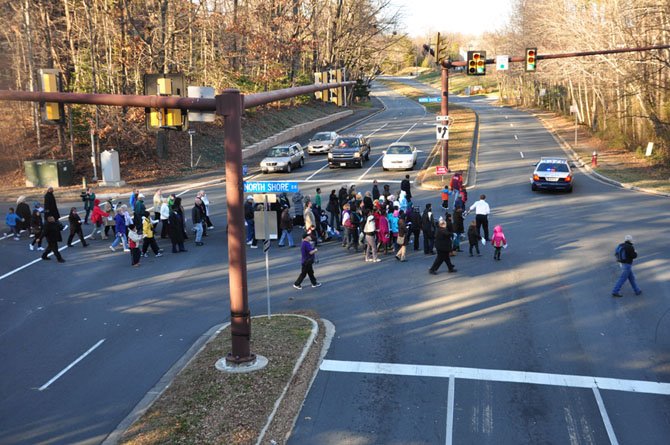 Reston — As he stood in front of the Northern Virginia Hebrew Congregation Sunday, Jan. 20, to celebrate the legacy of Martin Luther King Jr., Isaiah Roberts of Reston knew he was participating in something special. 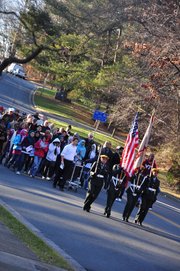 "I was standing in front of a Jewish congregation, listening to Muslim students speak the words of an African-American Christian minister, and I couldn’t help but feeling that this was exactly what Dr. King spoke about," Roberts said. "When they read the part about not judging one by the color of their skin, and I looked around to see whites, blacks, people of Middle Eastern descent nodding and cheering their agreement, and it gave me chills a little bit."

Roberts was one of dozens of participants in this year’s commemorative march through Reston, hosted by the Reston Community Center. Marchers started at the Lake Anne Village Center and walked down North Shore Drive and Wiehle Avenue to the Northern Virginia Hebrew Congregation in a show of support for unity and equality.

Singing songs from the Civil Rights era, the marchers waved flags and signs. Themla Evans of Reston said even the circumstances of the commemorative march show how far things have come in this country.

"Back in Rev. King’s day, marches like this were a countercultural activity, they were done almost in defiance to the police and the standard community structure," she said. "Now we meet together with government officials at a community center and get a police escort, so it shows you the progress we’ve made. Hopefully no one mistakes it for the finish line, but we’re a lot closer to the goal of equality than a generation before, and hopefully the next generations will see the same type of progress."

After the conclusion of the march, Muslim students from Al Fatih Academy in Reston took turns reading King’s famous "I Have a Dream" speech.

The Northern Virginia Hebrew Congregation hosted a concert after the speech was read, featuring the Voices of Inspiration and the Washington Plaza Baptist Choir performances.

The music, prayers and scripture readings kept the audience, most of who stayed after the march, dancing and swaying in their seats for much of the program.

Many in attendance felt that this year’s Martin Luther King Day celebration was especially poignant on the eve of Barack Obama’s inauguration to a second term as president of the United States.

"Is the election of a black president the end of racism, or even the discussion of race in America? Of course not. But for a generation that remembers the fight to have equal footing in schools, it’s a sight to behold," said Doug Stevens of Reston. "And for the generation of children in school now, not only African-American, but all races, it shows that boundaries that have been in place for hundreds of years are starting to fall by the wayside."