On Dec. 17, Fairfax High students Mackenzie Ardinger, Brynn Brezovsky and Brooke Attkisson went to Sidney Lanier Middle School in the name of self-awareness and self-confidence, to share something they called the “For Me Project” with the middle schoolers. 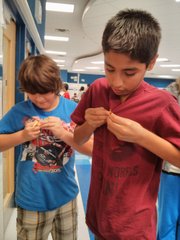 The girls were on a mission to promote self-awareness in students, “so that they can be successful through the transition from middle school to high school and be prepared to make good decisions,” wrote MacKenzie Ardinger in an email to the Connection.

The team passed out yellow ribbons during lunchtime, which they told students represented two important qualities: self-confidence and self-awareness. Later in the day, during the student’s Pride Time class, teachers who signed up for the assembly brought their students down to the auditorium. As the students entered they were given exit tickets on which to write something they learned from the assembly. 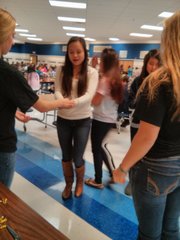 Assistant Principle Diana White introduced the For Me Project team, who showed the students a power point giving the definitions to phrases such as self-awareness, peer pressure, “growth mindset” (seeking help and improvement) and “fixed mindset” (viewing problems as if they are unchangeable). The presentation also included statistics on alcohol and drug use for teenagers.

The team then showed a video of Fairfax High School Rebels telling the audience about their troubles transitioning from middle to high school. The students in the video answered questions such as, “have you ever been pressured into doing anything and how did you get out of the situation? What were the consequences?”

The team then performed four skits, two of which used volunteers from the Lanier Middle School theater class.

The Lanier students’ skit explored the idea of the growth mindset concept, or seeking help and improvement to solve problems.

The team then held a question and answer session after which they collected the students exit tickets.

In an email to the Connection, MacKenzie Ardinger wrote, “Our presentation was a success, as we feel that we better prepared the middle school students for their transition into high school.”