Fairfax High Lions Instead of Rebels

Next name change could be Lanier Middle School. 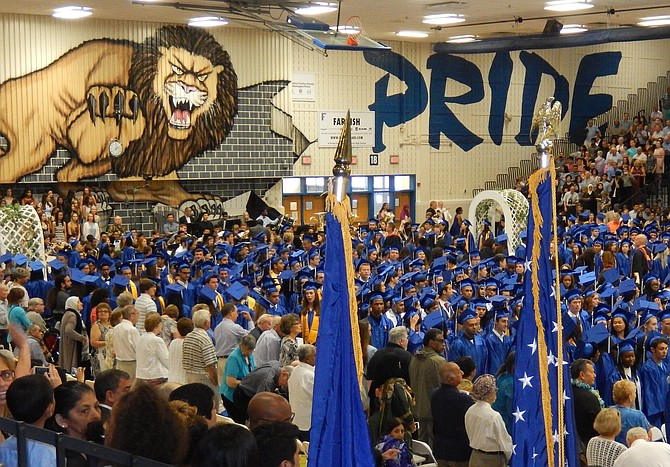 The lion, already painted on the wall of Fairfax High’s field house – shown during a past graduation ceremony there – is now the school’s new mascot. Photo by Bonnie Hobbs. 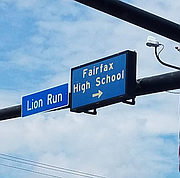 In the wave of the Black Lives Matter Movement – plus the anti-Confederate sentiment sweeping the country – Fairfax High’s mascot and teams will no longer be the Rebels. Instead, they’ll be called the Lions.

Principal Erin Lenart made the announcement last Thursday afternoon, June 18. And accordingly, that night, the Fairfax City School Board held a special meeting and changed the name of the street leading to the school from Rebel Run to Lion Run. These changes are effective immediately.

School Board Chairman Carolyn Pitches explained them – as well as what’s next on the horizon – in a statement to parents and the community. Regarding the team name-change, she said, “While this is solely a principal decision, the City of Fairfax School Board fully supports Dr. Lenart and shares her pride in officially becoming the Fairfax High School Lions.”

As for the street, Pitches said it’s owned by the School Board, so that’s why it has jurisdiction to change its name. This street was named Rebel Run in 1972 to reflect the school’s team name. And now, she said, Lion Run will do the same.

In addition, the Board voted to open public comment on possibly changing the name of Lanier Middle School.

It was named by Fairfax County Public Schools in 1959 after poet Sidney Lanier, who served in the Confederate Army from 1861-1865. The City of Fairfax acquired the land and building from Fairfax County when it incorporated into a city in 1961. The facility was then called Sidney Lanier Intermediate School, and the core name continued, as well, when it later became a middle school.

“As all naming rights of the City’s school buildings and facilities are the responsibility of the City of Fairfax School Board, I have asked our Superintendent, Dr. Phyllis Pajardo, to develop a plan that includes multiple opportunities for community engagement,” said Pitches. “The plan will be presented to our board at our regular School Board Meeting on Monday, July 6.”

The Board expects to begin public engagement later this summer, concluding in the fall, with a possible vote in September or October on whether to change the school’s name. Following the July meeting, it will inform the community of all the ways the public may provide input and ask questions. Meanwhile, residents are welcome to contact the Board by emailing SchoolBoard@FairfaxVa.gov or calling 703-293-7131.