Reports about the Rolex, one in a series of lavish gifts reportedly given to Gov. Robert F. McDonnell (R) and members of his family by a major campaign donor, told Petersen it was time to send a stern letter to the governor asking him to “come clean on this matter” by explaining the gifts, denying the reports, or resigning from office.

In recent weeks, I have read numerous reports regarding gifts your family reportedly received from Mr. Jonnie Williams and his company Star Scientific, Inc. The substance of these reports gives the strong impression that your family was materially and systematically benefited by this person and his company, at least over the past two years. Few, if any, of these gifts were reported in the public disclosures that you (like all of us) must file with the Secretary of the Commonwealth. In return, it appears that you allowed this person to use the Governor's Mansion and the Governor's Office for the purpose of giving unique credibility to his company. That is unacceptable.

I am writing you directly to ask that you come clean on this matter. If you or your family has received gifts of the type alleged, then you should disclose that fully and immediately.

If those gifts are consumer items which you have retained for personal use, then you should return them immediately to the donor — or sell them and donate the money to the Literary Fund. That is the only method by which the public can regain trust in your Office. Without that trust, there is no purpose in continuing to serve.

If you are unable to explain (or deny) these reports or return the items, then I humbly suggest that you should step down as Governor and permit the Lieutenant Governor to serve out the balance of your term, pursuant to Article V, Section 16 of the Virginia Constitution.

On Tuesday, July 2, Petersen sent his letter, becoming the first Virginia lawmaker to suggest McDonnell’s resignation in the wake of the deepening controversy.

“When I heard about the Rolex watch and the circumstances of that gift, that was when I knew I had to speak out,” Petersen said on Friday. “I actually drafted my letter a couple days before, but did not send it right away. I was waiting to see if somebody else would step up, but nobody did. So we mailed it out on the morning of July 2. I also called the governor's staff and emailed them a copy.”

LATER THAT NIGHT, Petersen appeared on MSNBC’s Rachel Maddow show, featuring Maddow’s liberal and animated take on the political news of the day.

Maddow asked him if it was the “overall weight of the allegation, the long list of things he has … allegedly received in his capacity as governor” or one item in particular that prompted the letter.

“I have three daughters, so when I heard about the $15,000 spent on the wedding reception, that kind of took me aback,” Petersen told Maddow. “There was a lot of joking about it, and I guess people thought maybe this was a one-time thing, maybe there's an explanation.” But Petersen said as the weeks went by with revelations of “one item after another,” he was dismayed by the deafening silence.

“There's been no explanation from the governor … and hiding behind ‘no comment,’ that's not working. The people of Virginia deserve better,” Petersen said.

In an interview Friday, Petersen said he didn’t know why other members of his party had remained silent about the gifts McDonnell reportedly received from Jonnie R. Williams Sr., CEO of Star Scientific, which manufactures dietary supplements.

“Because of that continuing silence, I felt compelled to step forward. I didn't understand why everyone was afraid to speak out, when this was so obviously wrong,” Petersen said.

For the past several months, reports have surfaced about the lavish gifts Williams gave to McDonnell and first lady Maureen McDonnell, including clothing, money and trips. The gifts included $15,000 in catering for the 2011 wedding of McDonnell’s daughter at Virginia’s historic Executive Mansion.

McDonnell has said he did not disclose the catering because it was a wedding present to his daughter, and he has been thorough in his annual financial disclosures regarding gifts. In January, he told The Richmond-Times Dispatch that the Rolex was a gift from his wife.

The ongoing revelations about the gifts, and the lack of disclosure from the governor, are at the crux of ongoing state and federal investigations.

On April 29, it was first reported that federal authorities were interviewing McDonnell and the first lady about their relationship to Williams, as well as actions the McDonnells may have taken that benefited Williams and his company.

In May, it was reported that Richmond Commonwealth’s Attorney Michael Herring is investigating whether McDonnell violated state gift and disclosure laws.

According to The Virginia Public Access Project, Star Scientific and Williams gave $130,000 to Virginia officials and a PAC that supports McDonnell from 2009 to 2012.

“It is not illegal to accept gifts,” said Del. Dave Albo (R-42), the most senior delegate from Northern Virginia. “They are just supposed to be reported.”

According to Virginia state law, McDonnell must disclose all gifts to him worth more than $50. But he does not have to disclose gifts to immediate family members or gifts received from family or “personal friends.”

Petersen said he was also bothered by the quid pro quo nature of the gifts. In August 2011, the first couple hosted a launch party for one of Star Scientific’s products at the governor’s mansion.

“The reports give the strong impression that your family was materially and systematically benefited by this person and his company. … In return, it appears that you allowed this person to use the Governor’s Mansion and the Governor’s Office for the purpose of giving unique credibility to his company,” Petersen wrote in the letter.

Petersen said the only response he’s had to his letter from the governor’s office was a call from McDonnell’s lawyer. “His lawyer called me and basically told me that his client could not talk because of the investigation. My response was ‘this is not just a legal issue. Your client needs to tell the people of this state what's going on.’”

“As an attorney, certainly Senator Petersen understands this office’s not discussing the details of matters pending in the legal process,” said Tucker Martin, a spokesman for the governor, in a statement released last week. “And, as a legislator, certainly Senator Petersen is aware that Virginia’s disclosure requirements do not pertain to the families of elected officials.” 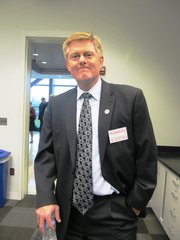 “Chap's letter was political grandstanding,” said Supervisor John Cook (R-Braddock). “I am disappointed to see this issue out there. It is absolutely important to maintain integrity in government. But right now no one has proved any wrongdoing, so we just need to let the process [investigation] play out.”

“Honestly, I would prefer that someone else be doing this,” Petersen said. “I take zero joy in staking out this position.”

Petersen added that he has known McDonnell for 12 years and considers him sincere, forthright and unfailingly courteous.

“I still can’t believe that he would permit this type of dealings in his household. That’s why the Star Scientific reports are such a shock,” Petersen said.

During a gathering at Reston’s Lake Thoreau pool during the 4th of July holiday, several people were discussing the issue.

While some residents were highly critical, Peggy Hancuff said the issue of the governor’s alleged gifts was relatively unimportant. “There are politics that are important, such as voter ID and the governor’s election coming up, and then there are politics that are a distraction. This is a distraction. There are bigger issues out there,” Hancuff said.