Working Together To Assist ‘Warriors in Transition’
Votes

Working Together To Assist ‘Warriors in Transition’ 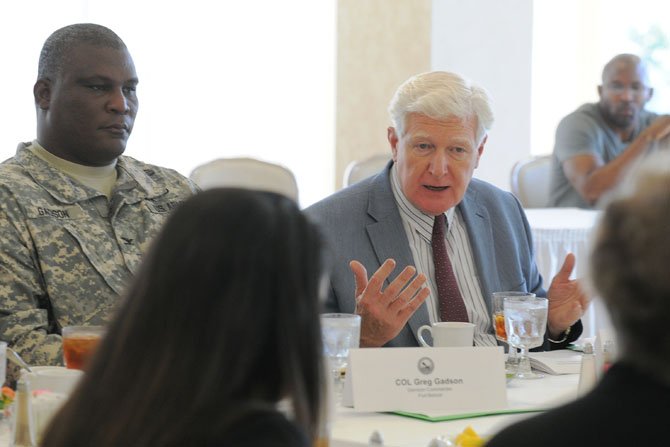 U.S. Rep. Jim Moran opens the discussion with a question of ways to facilitate how to maximize rehabilitation for our wounded warriors. Photo by Louise Krafft.

Moran opened the conversation with: "The purpose of this meeting is to bring together the key stakeholders — nonprofit organizations, community groups, and staff at Fort Belvoir — to discuss ways we can maximize rehabilitation for our wounded warriors. Northern Virginia has substantial natural resources and residents with a strong desire to build on Fort Belvoir's efforts to help our wounded warriors. It has the potential to serve as a model for wounded warrior care across the nation. This roundtable is a starting point — in the coming months we will continue to work together to create synergy with the Warriors in Transition Unit and the surrounding community."

Hyland noted: “The conversation opened a very large door to establishing a meaningful relationship with the military in regards to offering community activities to enhance the rehabilitation of the wounded warriors at Fort Belvoir.”