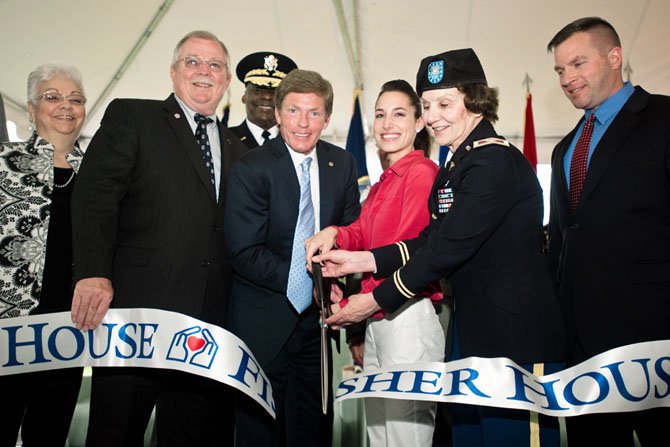 Located in close proximity to the hospital it serves, each Fisher House is handicapped-accessible, and consists of between 8-21 suites, with private bedrooms and baths. Families share a common kitchen, laundry facilities, dining and living room, with a library and toys for children. The Fisher House Foundation ensures that there is no fee to stay In a Fisher House. Since its inception the program has saved military and veteran families an estimated $192 million in out-of-pocket costs for lodging and transportation.

Several of the attending donors spoke about the critically important effort needed to support families and wounded warriors as part of a long-range commitment to honoring those military who served their country. Donors discussed their passion for raising the money to build the Fort Belvoir family comfort home on the Base property which will accommodate up to 12 families who are there to visit and support combat wounded and others who are otherwise in need of medical and rehabilitation care.

Ken Fisher, CEO and chairman of the Fisher House Foundation said in his prepared remarks: “We are pleased to dedicate this house to serve the Fort Belvoir community and the Fort Belvoir Community Hospital. … When they need it most, our military families will be able to count on this house as a place of refuge when so much of their world has been turned upside down.”

This is the third such temporary housing facility built in Virginia and is part of 57 Fisher houses built and located worldwide. As stated by several speakers, Fisher House is an integral part of the global strategy to provide patient and family-centered compassionate care for the whole military family.