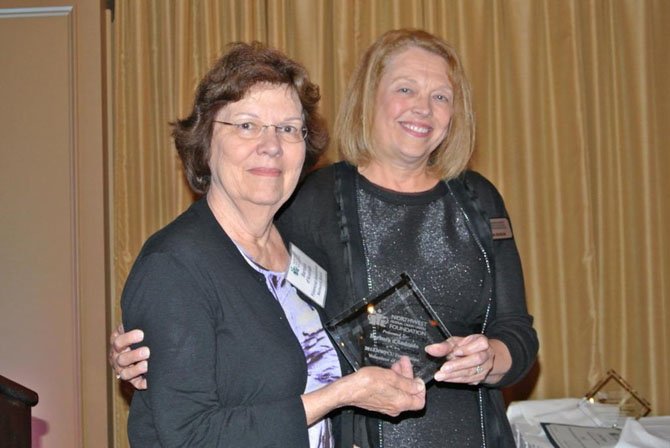 Linda Rogus, executive director of NWFCU Foundation (right), presents Barbara d’Andrade with the 2013 Volunteer of the Year award. D’Andrade lives in Vienna and has been an active foundation volunteer for several years. Contributed

Northwest Federal Credit Union Foundation knows many hands play a role in the success of its charitable outreach and financial education efforts—including those of Barbara d’Andrade, its former executive director who has remained an active foundation volunteer since retiring in 2007.

NWFCU Foundation named d’Andrade, who resides in Vienna, its 2013 Volunteer of the Year at its annual awards ceremony last month.

“Did they surprise me? They really did, but I am so honored to be recognized,” said d’Andrade, who holds a “great passion” for the efforts of the foundation. “It’s so rewarding to volunteer and see the difference you can make in the community. I get such satisfaction in helping others through the foundation.”

While d’Andrade assists with many foundation programs, she has two favorites: serving on the Scholarship Committee and helping with its Realty Store.

“I enjoy volunteering with the scholarship program—it’s a phenomenal recognition of students’ leadership and dedication to their communities,” said d’Andrade. “It seems there are many awards available for students with the highest academic achievements, but not as many for those exhibiting great leadership qualities but not ranked at the top in their class. These scholarships acknowledge this group.” The foundation recently awarded more than $100,000 in scholarships for 2013.

The Reality Store provides local high school students a glance at life and responsibilities 10 years in the future. “We try to teach them what they might face in the future with a career, salary, family and budgeting issues,” said d’Andrade. “We help them make decisions based on their given life scenario. It’s a real eye opener for them, and it’s wonderful to help focus them in the right direction.” Roughly 25 volunteers assist during each session of the Realty Store, and nearly 10,000 students have participated in the program during the past four years.

At the foundation’s awards ceremony, several others were honored, including:

FAN works to address the growing concern over the lack of financial education among today’s youth and adults. It partners with the foundation to prepare individuals for financial success.

“Our foundation’s success is only possible with the support of many wonderful people giving their time, ideas and resources,” said Linda Rogus, executive director of NWFCU Foundation. “Barbara has been a huge asset to our organization and the many, many people she touched through her volunteer efforts over the past six years. Her spirit and enthusiasm for helping others is infectious, and her award is truly well-deserved.”

To get involved with the NWFCU Foundation, call 703-925-5092 or visit www.nwfcufoundation.org.