"Yes, we have significant gaps [in reflecting diversity in the department]. We can do a better job recruiting and we want to create more robust engagement with our county's many ethnic communities," Roessler said during a brief new conference after the appointment.

A 24-year veteran of the department, Roessler said he considered his "integrity" and "compassion" hallmarks of his leadership style, and "strategic planning" as the "backbone of my leadership style."

Roessler directed strategic planning initiatives for the department "to ensure a high standard of service delivery" as Fairfax County plans a new police headquarters in 2016 and future infrastructure growth planned in many communities throughout Fairfax. 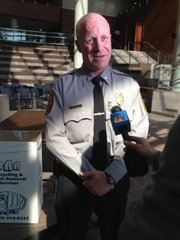 "I am pleased to name Ed Roessler as Fairfax County’s new police chief," said Board of Supervisor's Chairman Sharon Bulova. "Not only has he performed exceptionally well in his role as acting police chief, but he also possesses a wide range and depth of experience gathered over his 24-year tenure in law enforcement."

Roessler began his law enforcement career with the New York City Department of Investigation before joining the Fairfax County Police Department as a patrol officer. He has served in every rank—up to and including deputy chief.

Prior senior command assignments have included the Internal Affairs Bureau, director of the Criminal Justice Academy, managing the department’s budget and human resources and leading a Patrol Bureau division that included the Animal Services Division, the Crime Analysis Unit and the construction of the Sully District Station. In addition to these command assignments, he led efforts that created the Incident Support Services program serving department members and their families, the Athletic Trainer Coordinator program and several other innovative employee support service programs.

Roessler received his undergraduate degree from Arizona State University and his graduate degree from the George Washington University. During his career he also has graduated from a variety of professional development programs including the Federal Bureau of Investigation’s National Executive Institute and National Academy, American University’s Key Executive Graduate Program, the United States Military Academy West Point Leadership Program and Leadership Fairfax.