“Being the chief, I feel like a cop on the street again. Being able to serve others, I feel content. This is a calling, and I’m just proud to be part of a great organization and county.” 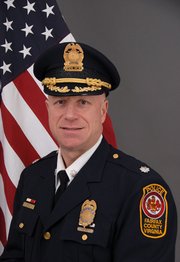 The position became vacant in October 2012, when former Chief Dave Rohrer was promoted to deputy county executive for public safety. Roessler has served as acting police chief since March 23, and his new job culminates a law-enforcement career spanning 24 years.

“It’s a noble profession, I enjoy it and I look forward to being able to serve the men and women of the police department and the community,” he said. “And what’s really exciting is that I’m a member of the community, and it’s an honor to serve my neighbors.”

Originally from Brooklyn, N.Y., Roessler, 49, actually comes from a family of New York City firefighters. But a few uncles were police officers and, in high school, he decided to study criminal justice and go into law enforcement.

Then, after a stint with the New York City Department of Investigation, he and his wife moved to Virginia for a better lifestyle. While in college, Roessler did an internship at American University and got a taste of Fairfax County. And earlier, two cousins had moved here—one joining the police department and, the other, the fire department.

So he came to the county, too, and became a patrol officer. “Route 28 was one lane each way then, and there were three farms here when we first moved to Centreville, over 24 years ago,” said Roessler.

HE AND HIS WIFE, a small-business owner, have three children. Their oldest daughter is in college, their youngest daughter is a high school senior and their son is starting middle school.

Over the years, Roessler’s held several high-level, management positions. But as far as he’s concerned, the highlight of his career was being a patrol officer.

“It’s the satisfaction of helping someone in crisis or just lending them a hand when they need it,” he explained. “Sometimes, you’re doing something that changes their life. Patrol officers are given the latitude, discretion and trust to help the community, and that’s what drew me to the job.”

But throughout every assignment, said Roessler, “It’s a police family; the people I work with, we’re a team. And in every county agency, I’ve had great mentors that allowed me to grow. It’s a leadership style of always being willing to help each other out.

“You entrust your life to others so you can get home at the end of the day,” he continued. “It’s also about the working relationships you form. And what a terrific community this is—the support we get is a thrill.” He said the residents and the county leadership are the police department’s partners in making Fairfax County a safe place to live, work and play.

Roessler chose the supervision-and-command career path, within the department, and competed for each advancement, including deputy chief. However, he became acting chief based on his seniority. He then applied for the top job, and the supervisors and county executive conducted a national search over some six months.

Tuesday morning at 9:30 a.m., Roessler officially became chief, and he couldn’t have been happier. “Being the chief, I feel like a cop on the street again. Being able to serve others, I feel content. This is a calling, and I’m just proud to be part of a great organization and county. The support from the community—and having terrific staff and volunteers—makes it fun.”

HIS VISION now is for the police to “continue ethical leadership with an engaged community so we can continue to build upon our ability to fight crime, enhance our culture of safety and keep pace with urbanization.” He said the culture of safety includes developing safety protocols regarding how the police interact with the community.

As for urbanization, Roessler tied it to the 11 new police positions the supervisors approved as of July. Two will be animal control officers and nine will be the foundation of a new police station in Tysons Corner. Others will be needed in connection with county growth related to projects such as the Silver Line, rail to Dulles, the Springfield Mall redevelopment and the revitalization of Route 1, South County and the Reston Town Center.

“So it’ll take a new style of policing,” he said. “For example, officers will go up a 30-story building or navigate a city-style environment in pairs.” And when large crowds flock to places such as Fairfax Corner on the weekends, said Roessler, “We need to pay attention to make sure we have adequate staffing to meet future needs. All this will happen over decades, but we need to start planning now.”

“We’ll make five-year strategic plans, including staffing, budgets and program objectives, and tweak them,” he said. In the current economy, said Roessler, “We’re looking at where we can alter our business model, without sacrificing safety, to economize where we can. But as the economy improves, we’ll be able to do more.”

Looking back on his distinguished career, what he’s proudest of is being a patrol officer. “And it’s important for me to remember that,” he added. “They’re what the community sees every day; they’re the first responders to 911 calls. They’re the face of the Fairfax County Police Department and they’re what makes our reputation.”

Now leading 1,360 sworn officers, 352 non-sworn officers, plus a core of volunteers, Roessler takes his new position seriously. He said the toughest part of his job will be meeting the challenge of looking out for the employees’ safety and welfare, including their pay and benefits, within budget constraints.

What will give him the greatest satisfaction, he said, is “being able to serve my fellow employees, volunteers and the community as a leader. I love Fairfax County. The motto is ‘A great place to live, work, play and grow old,’ and I’m living all that.”