Growing up With Baseball in Great Falls
Votes

Growing up With Baseball in Great Falls 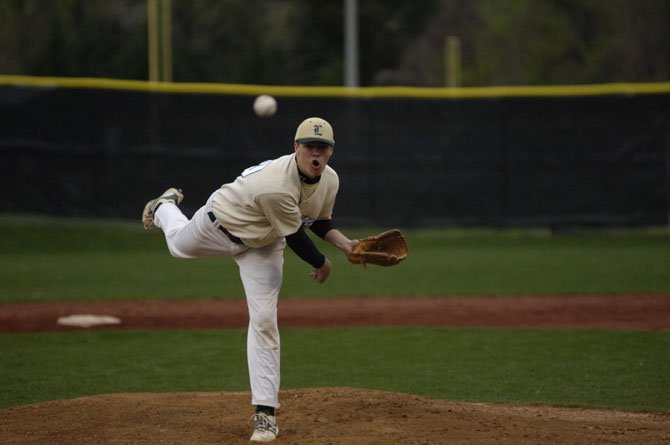 Senior Bryan Even pitches for the Langley baseball team. Even will head to St. Anselm next fall to play Division II baseball. Photo Contributed

Great Falls — Growing up in Great Falls, Langley High School senior Bryan Even found his second home on the diamond. He started his career with Great Falls Little League, where he found inspiration every opening day from the members of the Langley Saxons varsity team.

"Every opening day the Langley players would be there at the end of our parade, giving us high fives and giving us something to look up to," Even said. "I used to look up to them every year, they were my inspiration when I played, because that’s what I wanted to become."

Langley senior Bryan Even swings at a pitch during one of the team’s games this season. Even will go on to play Division II baseball next season at St. Anselm in New Hampshire.

Eventually he moved from Forestville Elementary School to Cooper Middle School to Langley, where he was able to don the green and gold for the Saxons.

ON THE FIELD, Even has had his fair share of memorable moments. He started off his junior year with a grand slam, his first hit of the year.

He also went out on top, capping his high school with a 5-0 record as a senior starting pitcher, as well as one save.

"I came into my senior year knowing that I was expected to take a leadership role with the team, and I wanted that to start on the mound," he said. "Coach would come up to me as I went out there, and would say ‘Even, let’s hold them here’ and I would go ‘Yes sir, yes sir.’ I knew that if a ball was in play, I could trust the defense enough to get the outs, so I just had to pitch to each batter. And once our offense got us a few runs, I was good to go."

Varsity coach Kevin Healy says he noticed Even come into his senior year with a special focus.

"He’s always been a very hardworking, personable and coachable player, and he spent his senior season as a great presence on the team, during practices, during games, he wanted to be the one to set the example," Healy said. "He really made an impact for us on the mound, keeping people off base, walking very few batters, but recording more than 80 strikeouts. At the plate he started hitting more line drives and really got his batting average up."

In addition to his starting pitching duties, Even played first base when not pitching, and often batted third or fourth in the lineup.

Langley High School baseball player Bryan Even tries to tag a base runner during one of the Saxons’ game this season.

"I love the challenge of trying to shut the other team down while I’m pitching, and then coming right back up to the plate and try and get us some runs," he said.

While Even is a tough competitor on the field, Healy says he has always known him to have a good sense of humor off the field, even if it comes at his own expense.

"Last year, he hit a game-winning home run against Fairfax, and as he rounded second base, he was so excited he started clapping as he ran the bases," Healy said. "On the bus ride home, the seniors were having fun with him, telling him he needs to learn to celebrate better. And he took it all in good fun, laughing right along with them. That showed me that even though he had the biggest hit of the game, his ego wasn’t so big that he couldn’t laugh at himself right after."

OFF THE FIELD, Even’s work ethic made a strong impression on the Langley community. Assistant Principal Fred Amico said he always appreciated Even’s attitude toward schoolwork.

"I remember once he had a test that he really needed a good grade in, and for days I would come out of my office and see him sitting at a table, reading until his eyes were blurry," he said. "He didn’t complain a bit, that’s not Bryan, he just puts in as much time as he can and has a great attitude while he’s doing it. He’s the kind of person that will leave no stone unturned when it comes to getting something done."

Even will be headed to St. Anselm in Manchester, N.H. in the fall, on an academic and athletic scholarship, where he will play baseball and major in business. He will fulfill the same responsibilities as he did while playing for the Saxons, playing pitcher and first base for the Division II Hawks.

"I really love the environment up there, I’ve got family at the school, and a great relationship with the coach, who says he sees a lot of potential in me," Even said. "During baseball tournaments and college visits, I probably saw more than 20 colleges, but after talking to coach [Barry] Rosen, we really clicked."

Langley Senior Bryan Even pitches in one of the Saxons’ games. Even, who went 5-0 with a save this season on the mound, will play Division II baseball next fall.

As the first one of his recruiting class to sign, Even had his arrangements made on the first day of his senior year. But that didn’t mean he could ease up during the school year.

"It was a relief, but I knew I still had to work. The school offered me an increased scholarship if I was able to meet a GPA goal for the first quarter, and I was able to do that," Even said. "Next year, I think of myself as a student-athlete, and the student part comes first. There will be a lot more games and a lot more work to be put in when it comes to baseball, but it’s going to be up to me to find the time to get it all in."

Even said he’s ready to take on new challenges, such as playing with a wood bat and in temperatures that will most likely get colder than Northern Virginia, but also grateful for the experiences he had in Great Falls.

"There’s a few players on the Langley team that I’ve been playing with or against since I was in first grade, and it’s been fun to see how we’ve all grown and kept baseball a part of our lives," Even said. "I definitely hope to come back to Langley, everything from the great relationship the team has with our home crowds, to the players and coaches I know so well is something I would love to come back to."