Scott DiGiammarino uses film clips to get message across.

Great Falls — Great Falls resident Scott DiGiammarino knows the power of movies. In his recent TED Talk at TEDx Rock Creek Park, entitled "Why Movies Move Us," he spoke about the impact movies have, and the neuroscience behind it.

He mentioned a study that was conducted three years ago, where 50 percent of the world admitted to being afraid of swimming in the ocean. Eighty percent of those people said that they didn’t want to go in because they were still afraid of "Jaws," despite the fact that it came out in 1975.

He also knows that enrollment in martial arts classes tripled in the year "The Karate Kid" came out, and that after the release of "Top Gun," recruitment of Naval aviators increased by 500 percent and sales of Ray Ban sunglasses, bomber jackets and karaoke machines skyrocketed.

Tapping into the effect movies have on people is what led DiGiammarino to start his company, Reel Potential, which uses Hollywood movie clips to help business leaders inspire, engage and communicate with employees in a short, entertaining and memorable manner.

An award-winning senior executive for American Express Financial Advisors, he moved to Great Falls in 1992, taking over a market that was ranked 173 out of 176 regions. During his first year, he led his team to number one, and they maintained that ranking for over two decades.

IN THE PROCESS, DiGiammarino saw the scope of the business expand rapidly. Over a six-year period, he went from one office to more than 200, from 32 employees to more than 1,600 and from three leaders reporting to him to over 120. But the growth came with challenges.

"When you have one office, it’s easier to lead. You can see people’s faces and know when they’re having a good day or a bad day. You know when people need some direction, some motivation or just someone to talk to," he said. "But as we grew, our leading indicators started to show some cracks and we knew that if we wanted to continue our success, we needed to get creative to ensure best efforts from everyone."

Not wanting to throw away the results and the goodwill that took him years to build, DiGiammarino went on a quest to understand what made people tick, adjusting his strategy based on those findings.

"I learned that the average attention span was shrinking. We now start losing people after 17 seconds. The days of the three-hour meeting are gone. I learned that most generations these days like to be entertained, and they prefer short video versus white boards, Power Points and boring emails," he said. "We also wanted to know what people wanted to stand for as an organization. What would make our employees proud to come to work every day? What were our collective values and principles? Together, our employees built a list of over 200 themes. Some of the top ones included service, ethics, perseverance, honesty, principle based decision-making, hope and fun. My task was to figure out a way to take what I learned and the feedback we received and develop a culture and environment that encompassed what the new generation was demanding." 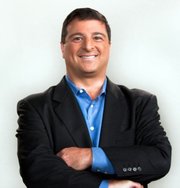 A self-proclaimed "movie guy," DiGiammarino has a collection of more than 600 DVDs. He saw movies as something that everyone could relate to.

"We started sending out theme based emails on a weekly basis. An example of a theme could be courage. I would then write up a short statement as to why being courageous was so important. Then, we’d attach a movie clip that supported that theme. I would ask people to write down the most courageous moment in their lives, and if they wanted to, feel free to send their story my way," he said. "What was amazing is that most of the stories had nothing to do with business. They were mostly personal in nature. They were stories that happened in people’s everyday lives. They were incredibly emotional and compelling."

He found his employees responded very well to this: He started getting 200 to 300 responses back a week.

DiGiammarino, with approval from the writer, would choose a story a week to send out to the rest of the organization. He says that sharing helped build a culture where people started to understand and believe in one another.

The numbers eventually led American Express to see if DiGiammarino’s success could be replicated, and soon he was on the road, speaking throughout the country. After one speaking gig in Las Vegas, where he used a number of movie clips about leaving a legacy, a woman came up to him and told him that she experienced the entire gamut of emotions during the talk. She said that she’d never forget the presentation.

"That’s when I realized I may have stumbled on something big. As soon as I got home I started calling the Hollywood movie studios to see if we could partner together to try to change the world. The negotiations lasted more than nine years," he said. "I finally got a call from Universal Studios, and in 2010, Reel Potential became the first company in the history of Hollywood to gain legal access to movie clips for business-to-business purposes. This was a massive coup."

Today, DiGiammarino works with companies who are looking to help engage their employees to maximize their true talents. He has thousands of theme-based movie clips that are available to help clients communicate in a way that connects to employees.

Now that he’s tackled the business world, DiGiammarino’s next target is the younger generation.

"In 2008, close to 55 percent of students had a job upon graduation from college. By 2012, that number had dropped to 22 percent. A Rutgers study says that over the past five years, 53 percent of college graduates are unemployed or under employed, and CNBC said that close to 38 percent of college grads are working in jobs that don’t require a college degree," he said. "When I started to research why this might be, sure the economy had something to do with it. But, I also found that this current generation of graduates are the first ones who had ‘helicopter parents.’ These are parents who made a majority of decisions for their children when they were growing up. Research shows that this became really heightened after 9/11, when we became even more protective than ever. Most employers today state that one of the top attributes that they are looking for is someone who can make a great decision that’s in alignment with corporate values. Our children have so much talent and such a bright future … but in today’s society, they have to be superb at making decisions, especially when the boss isn’t around."

This led DiGiammarino to branch out into Reel Potential University, which aims to reverse the downward trend of post-college employment and salaries by using the movie clips to incorporate life lessons and principles that will prepare students to successfully enter the workforce.

"The recent and future graduates will need more than just book smarts to lead," he said. "They need to supplement their classroom learnings with reality based, memorable lessons which will give them the confidence, the knowledge and the wisdom that they’ll need to succeed."

DiGiammarino says he still tries to watch a movie every day, and is constantly cataloguing and taking notes of themes and sections that could be applicable to Reel Potential.

"I feel like with Reel Potential and RPU, we can really help make a positive difference in the world, using movie clips to help people maximize every ounce of potential they have in them," he said. "It doesn’t matter if it’s in the workplace, in the classroom or at home, sometimes we just need something different, to help you tap into it."