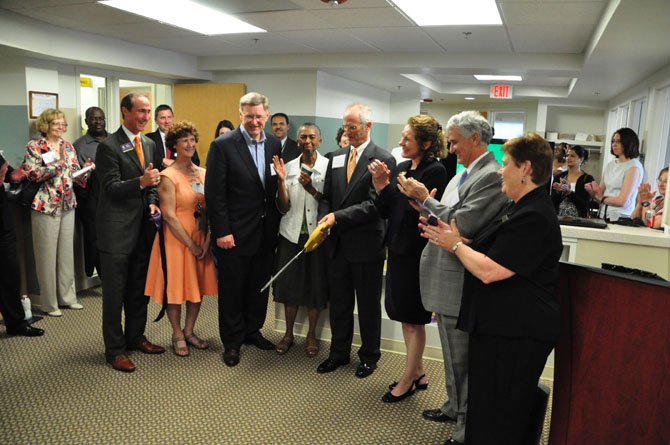 Local officials and members of HealthWorks for Northern Virginia cut the ribbon on a new facility in Herndon Tuesday, June 11. Photo by Alex McVeigh.

Herndon — HealthWorks for Northern Virginia opened a new healthcare center in Herndon Tuesday, June 11, the first such facility in Fairfax County that will receive funding from the federal government via the Affordable Healthcare Act. The center will provide medical, dental and behavioral healthcare.

“The numbers of those in our county who lack access to healthcare is indeed shockingly high. A year ago the Jeanie Schmidt Free Clinic, which had been serving the area for 10 years, was nearing capacity. We were caring for 1,600 patients and all of our adult patients are suffering from a chronic illness,” said Carol Jameson, associate CEO for HealthWorks for Northern Virginia. “The opportunity to join with the Loudoun Community Health Center and form a new community health center presented itself and we moved ahead.” 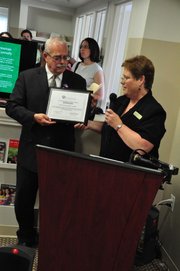 HealthWorks for Northern Virginia Associate CEO Carol Jameson presents Rep. Gerry Connolly (D-11) with a certificate of appreciation at the opening of their new facility in Herndon Tuesday, June 11.

Health Works of Northern Virginia is the result of a merger between the Jeanie Schmidt Free Clinic and the Loudoun County Community Health Center, which took place in October 2012. The merger effectively tripled the amount of low-income patients served.

HEALTHWORKS CURRENTLY SERVES more than 8,000 patients in three centers in Fairfax and Loudoun Counties. According to Fairfax County, there are 150,000 residents that do not have health insurance.

Fairfax County contributed funding to build the center, and also provided it with grants to support programs. Three county staff will be permanently onsite to ensure patients can access the services they’re eligible for.

This is the first healthcare clinic in Fairfax to be funded under the provision of the Affordable Healthcare Act. The federal government contributed $650,000 to the clinic.

Rep. Gerry Connolly (D-11) said that centers like this are why he is such a staunch defender of the Affordable Healthcare act, citing the 30 million people in America, and 300,000 in Virginia alone that will be able to get health insurance.

“It’s not OK to have 30 million fellow Americans not covered by some kind of healthcare. It’s not OK that millions of families in America actually have to do the calibration when their kid gets sick, ‘will he walk it off, or will it develop into something more serious and therefore, more expensive?’” he said. “It’s not OK that for million of Americans the primary portal of healthcare is the emergency room because they can’t afford to or don’t have healthcare coverage.”

THE SPIRIT of providing healthcare services to those in need was what nurse Jeanie Schmidt had in mind when she started giving free school physicals to underprivileged students in July 2002 at Herndon Middle School.

In 2007, the clinic expanded its services to treat adults with chronic health issues. Jeff Clayton, a board member of HealthWorks, said that the new facility is well-positioned to meet those goals well into the future.

“The organization’s goal was to provide healthcare services to people who needed them, regardless of their ability to pay. From its origin providing physicals in school gymnasiums to children who needed them, to its first permanent home on Elden Street, to its second home off of Technology Drive, it really did accomplish just that,” he said. “It served thousands of patients over a number of years and became the medical home to hundreds of patients who had some very complex problems, a lot of those resulting from diabetes or hypertension.”

Given the Jeanie Schmidt Clinic’s long relationship with Herndon, Mayor Lisa Merkel said she was “thrilled to have this new facility in the heart of Herndon.”

The facility is located 1141 Elden Street, Suite 300. More information on HealthWorks of Northern Virginia can be fond at www.hwnova.org.