Rising to Boys & Girls Clubs ‘Youth of the Year’
Votes

Rising to Boys & Girls Clubs ‘Youth of the Year’

Today, Henry Lopez has a bright future, complete with a full scholarship to college. It wasn’t always that way, however, and he remembers being a preschool student in a foreign country, unfamiliar with the language and culture, fighting to learn, to fit in, to avoid falling into a gang.

Photo courtesy of Boys and Girls Club of Fairfax

“It would have been very easy to be influenced by gang activity because my parents were working all the time. The Boys & Girls Clubs gave activities, provided me [with] a place to go to learn about college and explore careers. Had it not been for the Boys & Girls Clubs, I would not have had the vision of going to college.”— Henry Lopez.

“For my family, the American dream when we came here in 1999 was survival,” said Henry, who graduated from JEB Stuart High School in Falls Church last week. “In Guatemala, my parents realized that there was no money [or] opportunity to obtain it, so the only way to care for my [family] was to come to the United States.” 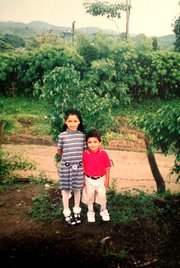 Henry Lopez (pictured here in Guatemala with his sister Yuri) moved with his family to Falls Church in search of the American dream. Earlier this month, he graduated from high school with a 4.3 G.P.A., was awarded a full scholarship to George Mason University and was selected as the Boys & Girls Clubs Youth of the Year for District of Columbia and Commonwealth of Virginia.

THAT DREAM has gone far beyond survival, as Henry was accepted into George Mason University’s Honors College and awarded a full academic scholarship to the Fairfax school as a University Scholar. Henry was one of 21 students selected from a pool of 1,500 applicants who were expected to “possess exemplary records of academic achievement … demonstrate evidence of intellectual vision, a commitment to the obligations of citizenship and the potential to overcome obstacles and solve challenging problems,” according to Anthony Dyer Hoefer. Ph.D., the director of Mason’s University Scholars Program and an Old Town Alexandria resident.

Henry Lopez (center) is pictured at home with (from left) his mother Emerita, his brother William, his sister Yuri and his father Arnoldo. Henry, who was selected as the Boys & Girls Clubs Youth of the Year for District of Columbia and Commonwealth of Virginia, credits his parents and the Boys & Girls Clubs of Fairfax with helping him realize his dreams.

His college application wasn’t the first time he impressed George Mason officials, however. While still in the eighth grade, Henry was accepted into George Mason’s Early Identification Program, which supports and enriches students who will be the first in their families to attend college.

“He was an exceptional first generation college student,” said Lewis E. Forrest II, the program’s executive director. “Recently, I was looking over his eighth grade application and he stated that his number one goal was to go to college. Not only has he met that goal, he has gained a positive reputation before he has even enrolled in classes here at Mason.”

Henry graduated with a 4.3 GPA as a member of the National Honor Society, as well as vice president of the JEB Stuart High School’s chapter of the Spanish Honor Society. Among a lengthy list of academic and extracurricular accomplishments, he also served on his high school’s Student Government Association and ran on the varsity cross-country team. While he’s proud of his accomplishments, he gives much of the credit to the support he received from his parents and the Boys & Girls Clubs of Greater Washington (BGCGW), Fairfax region located in Falls Church, Mount Vernon and Herndon.

Henry says his appreciation of hard work came from his parents: Emerita Lopez, who works as a housekeeper, and Arnoldo Lopez, a day laborer.

“Witnessing my parents physically push themselves every day had a tremendous impact on me,” said Henry. “I saw their situation and they constantly reminded me that they didn’t want me to clean houses or mow lawns.”

Emerita said she and her husband had loftier goals for Henry, his 21-year-old sister Yuri and his 13-year-old brother William. “I came here with my husband because it meant a much better life for my kids, but I had to work hard every day,” she said.

THE LOPEZ FAMILY moved to the Culmore neighborhood of Falls Church 15 years ago. It’s an area with affordable housing, but also gang activity, so the Lopezes found protection for their children in the form of the Culmore Chapter of the Boys & Girls Clubs.

“I start working at 8 in the morning and finished at 8 at night,” said Emerita. “I work as a housekeeper so we don’t have much money for babysitters. I was looking for a safe place for my kids while I worked long hours. When [they were] at the club, I knew that [they were] safe.”

Henry says that at the time, he was unaware of the danger that lurked in Culmore. “I had to grow up at a young age,” he said.

Wonhee Kang, regional director of the Fairfax County Region Boys & Girls Clubs of Greater Washington, has served an important role in Henry’s life. “When I first met him, he was 4,” she said. “It was right after he arrived in this country from Guatemala. When he first came to the club, he didn’t speak any English. He was hiding and he was very shy.”

Over the past 14 years, Kang has watched Lopez evolve from that shy little boy into an eloquent orator and a proficient scholar. “I’ve been watching him grow year after year. He learned slowly about culture, culture of the club and community,” she said. “There were times when he didn’t have appropriate clothes for speaking engagements and competitions so we made sure that he had a suit. I took him to our Youth of the Year competition in Newport News, Va., and that was his first time staying a hotel. The kids may not have [much] financially, but these are amazing young people.”

Kang said that Henry was always interested in academics. “He enjoyed the power hour, which is time for studying and homework. That made him strong academically and helped him earn a scholarship to George Mason University. He got into five universities, but he got a full scholarship from George Mason.”

It was the first time in Henry’s life his father was able to attend one of his activities. “It is not that doesn’t want to,” Kang said. “A lot of times his work schedule doesn’t allow it, but he is also afraid to go to events where the majority of people speak English and he doesn’t.”

Kang’s effort to ensure that Henry’s family attended the dinner proved to be a profound gesture. “I was overwhelmed the whole time because I had never gone to such an elegant event,” said Henry’s father, Arnoldo, through an interpreter. “Tears could not stay away as [Henry] spoke. It was hard for me to believe that he was talking in front of so many people.”

DURING HIS SPEECH, Henry told the crowd about the challenges he faced growing up in Virginia as an immigrant with financial limitations. “Looking back, the Clubs taught me to channel my responsibilities and develop a balance, providing me with a normal childhood. If it were not for the Boys & Girls Clubs, I would not be pursuing every resource to make a better future for myself and others.”

Representatives from George Mason were in the audience for Henry’s speech. “There were members of Congress, multimillionaire donors and representatives from the community who spoke,” said Hoefer. Henry, however, “was the one person who blew the crowd away. People were teary and getting choked up. He's the best example of what those programs can do for kids who don't have opportunities.”

When Henry begins college this fall, he will be embarking on a lifetime of potential and fulfilling one of the first goals that he set for himself. “The chance of college is a real opportunity and I’m willing to work for it,” said Henry. “It is personal story for me, but it is [also] a story for other youth in search of the American dream even if you have even if they have financial limitations.”