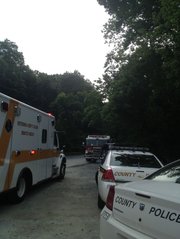 Some of the vehicles responding to the Old Anglers section of the Potomac River on Monday, June 24. Rescue efforts ended after several hours and efforts to recover the body continued at press time.

"The water will hold you and stick you against the rocks. There's no getting out at that point."

Potomac — A 19-year-old drowned in the Potomac River Monday. Rescue personnel were still searching for his body at the time of the Almanac's Tuesday press time.

According to Montgomery County Fire and Rescue Service, several teens were swimming by Purple Horse Beach, along the Billy Goat Trail.

"The Potomac often looks calm on the surface. What is not visible are downward moving currents that can pull a human being or dog down to the bottom," according to safety materials from the National Park Service.

On Monday, the 19-year-old was unable to make it back to shore. His friends attempted to rescue him without success, according to fire and rescue.

There was an "extensive search from the water, air and shore," said Graham, with emergency personnel from land, boat and helicopter.

Just one month ago, on May 22, Montgomery County Fire and Rescue, Fairfax Fire and Rescue, National Park Police from the Chesapeake and Ohio Canal National Historical Park at Great Falls, and the Potomac Paddlers Volunteer Corps, warned the public about the dangers of the river.

"You can get sucked underneath and pinned underneath real quickly," Lowe said. "Once you get down there, the force of the water and the current of the water will hold you and just stick you against the rocks. There's no getting out from that point."