States advise which to avoid, which to limit, due to PCBs and methyl mercury. 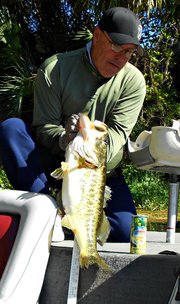 A fisherman hauls in a largemouth bass.

Carp PCBs Do Not Eat

American Eel PCBs Do Not Eat

Note: Consumption recommendations based on spacing of meals to avoid elevated exposure levels.

Severe restrictions on the amount of fish to consume by the week or month are recommended for most of the commonly occurring fish in the Potomac River and adjacent water bodies by the State of Maryland, Virginia, and District of Columbia. The detailed information necessary for fishermen to make an informed decision to protect their health is available primarily for those who have access to the internet and know to look for “Fish Consumption Advisories.”

The Maryland Department of Environment produces online a statewide “Fish Consumption Advisories” report for resident and migratory fish found in the Potomac River, as well as all Maryland water bodies, fresh and saltwater. The Virginia Department of Health produces online a “Fish Consumption Advisories” report that covers the Potomac River’s tributaries and other freshwater water bodies in Northern Virginia. The District of Columbia also issues an online fish consumption advisory for fishermen who fish in the Potomac River and its tributaries in the D.C. area. This includes the Anacostia river and Rock Creek.

A spokesman for the Maryland Department of Environment, Jay Apperson, listed the following ways in which they inform the public of the health hazards of eating contaminated fish:

Similarly, the Virginia Department of Health produces online a “Fish Consumption Advisory” report for the Potomac River Basin and its tributaries in Virginia. The Virginia Health Department is responsible for testing, analysis and guideline updates for Potomac River tributaries such as the Occoquan river and water bodies in Northern Virginia, but not the Potomac River. Virginia, Maryland, and D.C. do not collaborate on a formal information outreach and education program that regularly distributes safety guidelines by means of fliers, warning signs or other hard copy materials distributed to marinas, tackle shops and license issuing retail outlets. However, in the case of Virginia, warning signs are posted on shorelines of various water bodies in Virginia where they monitor and test for fish contamination. Virginia staff advisor Matt Skipjo said that his department would look forward to opportunities to collaborate with Maryland in improving information outreach.

“There are a large number of subsistence and recreational fishermen that eat the fish they catch in the Potomac River and adjacent rivers and streams that are likely unaware of the health hazards of the fish they eat.”

Maryland’s Apperson said, “Our approach is to ensure that recreational and subsistence fishermen have the necessary information about contaminant levels in fish so that they make good choices when deciding on whether or not to consume fish, by type, and how much fish to consume. We should not forget that fish can be an important part of a healthy diet because they are a good, low-fat source of protein and other nutrients. We should also moderate how often we eat fish with relatively high levels of contaminants — and Maryland’s fish consumption advisories provide recommendations to allow us to do just that. We want people to be informed so that they can enjoy Maryland fish in a healthy and responsible way.”

Apperson also said that past efforts to post signs in the Anacostia river area were subjected to vandalism, and not very successful. He left open the idea of renewing an effort to reach out to those who were not Internet oriented and may be consuming contaminated fish.

WHY IS THE POTOMAC River and its tributaries a haven for contaminated fish? Isn’t the river cleaner than ever before? Depending on one’s definition of clean water, the answer is a qualified yes with respect to recreational use in comparison to prior to the 1970s, but no regarding the level of toxic substances found in the riverbed and lake bottom sediment and the flesh of fish.

To access the Online fish consumption advisories for Maryland, Virginia, and the District of Columbia:

Passage of the federal Clean Water Act of 1972, the Safe Drinking Water Act of 1974, and the Toxic Controlled Substances Act of 1979 resulted in banning the production of PCBs, regulating the use of mercury, other toxic substances, and controlling point and non-point runoff. Maryland Department of Health’s John Backus said, “Despite years of effort to clean up the Potomac river and its tributaries, PCBs and methyl mercury still exist in significant quantities in the river sediment. Bottom eating fish such as catfish, carp, and the large predator fish such as striped bass (rockfish) and largemouth bass which eat smaller fish and crustaceans, contain significant amounts of what is called legacy pollutants; PCBs and methyl mercury dumped into the river or leached into the river over many years that still continues, and is slow to break down and dissipate.”

Del. Scott Surovell, a native of the 44th District that he now represents in the Virginia General Assembly, had this to say about fish consumption advisories and the overall health status of the Potomac River: “When I was a kid I could go to Paul Spring and catch minnows, crayfish, turtles, and frogs there. Now Paul Spring is like an open sewer and biologically dead. Polluted water now runs through Paul Spring on its way to the Potomac River. The only water body that is relatively clean in my district is the non tidal portion of Dogue Creek filtered by Huntley Meadows park. Since I have been elected, I have been posting water quality reports in my district. The reports merely confirm what is well known; all the waters in my district are loaded with e-coli and PCBs, among other pollutants. So I am not at all surprised that the fish contamination level is high in the Potomac river and its tributaries.

“I would very much like to see a host of remedies at work to clean up the creeks and streams in the Mount Vernon area. I would also like to see fish consumption warning signs posted on the Potomac River shoreline. There are a large number of subsistence and recreational fishermen that eat the fish they catch in the Potomac River and adjacent rivers and streams that are likely unaware of the health hazards of the fish they eat. They typically are unaware of or don’t have access to the Online fish consumption advisories and, therefore, warning signs, fliers, and brochures would be very helpful to those fishermen who don’t normally use the Internet. I would also like to see the U.S. National Park Service to either agree to post or allow to be posted fish consumption warning signs along the Potomac River shoreline in areas such as the mouth of Little Hunting Creek and other areas frequented by fisherman along the parkway areas that the NPS manages. Presently, no warning signs are permitted.”

Asked about the health of fish on the Potomac River, Captain Steve Chaconas, Potomac River fishing guide, said, “Decades of dumping heavy metals and PCBs into the Potomac have taken their toll. These elements build up in all fish over time. In addition, there are other chemicals that are not filtered in sewage treatment plants ending up in the food chain. The results are documented in same sex fish.”